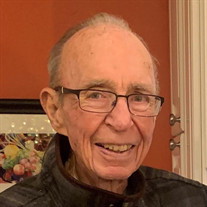 Stanley Ross Shuart passed peacefully on Wednesday May 26th 2021 at the age of 91 in his home in Annapolis after living a full life. He was born in Ramsey, New Jersey on April 15th 1930, the son of Stanley White Shuart and Alice Ross Shuart. He was the oldest of six children and was raised in Mahwah, New Jersey. He was married to Helen Martha McGregor for over 64 years who passed on the same Wednesday before Memorial Day in 2017. Their lives together took them to New Jersey, Maryland, Canada, Ohio and Florida. He graduated with a BS in chemistry from the University of Miami and was a faithful Hurricanes football fan until the end. He often dressed in his alma mater gear. As a young man Stan served in the US Army at Aberdeen, MD during the Korean War doing research and development on protective gear for his fellow soldiers. Stan’s career began in the petrochemical industry. He started with BF Goodrich in Akron OH, then worked in Manhattan for Exxon Chemical in the 1960s. That job led him to Maryland where he worked for Nevamar, a subsidiary of Exxon, in Odenton. In the 70s, Stan was co-owner of Castle Marina on Kent Island. He ended his career at Polysar Industries, which was located in Akron, Ohio and Sarnia, Ontario. After retiring he lent his hand and guidance to his children’s businesses. While living in Florida, Stan was involved with the expansion of the First Presbyterian Church of Bonita Springs. He loved the church and enjoyed singing in the choir. His remains will be placed in the columbarium next to Helen’s in the memorial garden there. Stan also enjoyed boating, fishing, travel, golf and a good political debate. Stan is survived by his four children, Martha Lehman (husband Stuart), Cynthia Shuart, Kenneth Shuart and Steven Shuart (wife Jill), nine grandchildren, and four great grand children. He is also survived by his four siblings, Valerie Edwards, Glenn Shuart, Sandra Nash and Judy Williams. Stan lived an active life until the end. He cherished his large family and friends and inspired so many with his faith and determination. Spending time with his family meant the world to him. A celebration of life will be held on Wednesday, June 30, 2021 at 5 PM at Unity by the Bay Church, 4 Pointless Forest Trail, Annapolis, MD 21409. Reception and light fare to follow.

Stanley Ross Shuart passed peacefully on Wednesday May 26th 2021 at the age of 91 in his home in Annapolis after living a full life. He was born in Ramsey, New Jersey on April 15th 1930, the son of Stanley White Shuart and Alice Ross Shuart.... View Obituary & Service Information

The family of Mr. Stanley Ross Shuart created this Life Tributes page to make it easy to share your memories.

Send flowers to the Shuart family.