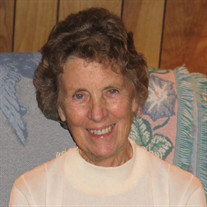 Shirley Rose Voshell (Pound) of Easton, MD, passed away on Monday, December 20, 2021 at University of Maryland Shore Regional Health Hospital in Easton, Maryland. She was 87 years old. Born in London, England on September 15, 1934, she was the daughter of the late Alfred George Pound and Rose Louisa Pound. She grew up in the midst of World War II in London. After completing her secondary education, she worked for the BBC for several years achieving a supervisory position. She met her late husband, Jesse Vane Voshell, Jr. on a blind date when he was in the U.S. Army stationed in Germany. They were married on June 6, 1959 in London. They then sailed 3,000 miles across the ocean to make their home in Cordova, Maryland. Shortly after arriving in Cordova, they purchased a small farm. Shirley worked for several years for Economy Printing in Easton, Maryland before becoming a full time Mom. In 1970, she and her husband opened their own small printing business, Voshell Printing. They operated the business together for 26 years until its closing in 2006. She also worked side by side with her husband raising chickens for local poultry processors from the late 1970’s to the early 2000’s. She maintained her British citizenship and her British charm, and always kept a touch of her British accent, which was often noticed by the people she met. Shirley happily served as a “Room Mother” all through her children’s elementary school years. She loved her family, her pets, and wildlife of all kinds. Flower and vegetable gardening, scrapbooking, and many other crafts were a passion for her. She was an avid nature lover and enjoyed feeding the birds and monitoring bluebird houses on the farm. Her grandchildren meant the world to her and she enjoyed spending time with them. In addition to her parents, she was preceded in death by her husband, Vane Voshell, and her sister Muriel Morton. Shirley is survived by her daughter, Debra Thomson and her husband, Barry; her son, Barry Voshell and his wife, Kimberly; two grandchildren, Karleigh Voshell and Tyler Voshell; sisters-in-law, Anne Duff and her husband Bob; Joan Daffin, Peggy Dunlap; brother-in-law Lee Voshell and his wife Eleanor; and many cousins, nieces and nephews both here in the United States and in England. Funeral services will be held on Wednesday, December 29, 2021 at 11:00 am at Fellows, Helfenbein and Newnam Funeral Home at 200 S. Harrison Street, Easton, MD 21601. The family will be receiving guests from 9:30 am - 11:00 am. Burial will follow at Greenmount Cemetery in Hillsboro, MD. Shirley was a long time supporter of animal rescues and because of her husband’s courageous battle, the American Cancer Society. Therefore, in lieu of flowers, memorial donations may be made to Baywater Animal Rescue, 4930 Bucktown Road, Cambridge, Maryland 21613 or the American Cancer Society, PO Box 22478, Oklahoma City, OK 73123.

Shirley Rose Voshell (Pound) of Easton, MD, passed away on Monday, December 20, 2021 at University of Maryland Shore Regional Health Hospital in Easton, Maryland. She was 87 years old. Born in London, England on September 15, 1934, she was... View Obituary & Service Information

The family of Shirley R. Voshell created this Life Tributes page to make it easy to share your memories.

Send flowers to the Voshell family.