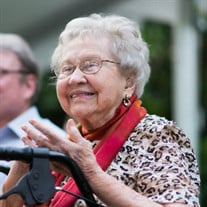 Shirley Rittenhouse Runde, 100, a devoted wife, mother, home economist, Methodist then Quaker, teacher and librarian, died September 26. Born in Chicago on February 17, 1921, Shirley was the oldest of four children born to Leila Byrne Rittenhouse and Franklin Stuart Rittenhouse. Her brother Stuart and two sisters, Helen and Mary Beth, predeceased her. She attended public schools in Chicago’s South Side Gresham neighborhood and graduated from Calumet High School. At Northern Illinois State Teacher’s College, she represented her college at a leadership program as a delegate to the George Williams College Camp in Wisconsin where she met her future husband, Robert Mill Runde Who was representing his college. She graduated with a Bachelor’s degree in Home Economics. Shirley married Bob in Belleville, Illinois, in 1941, where he was stationed at Scott Air Base. They were transferred to Camp Barkeley in Abilene, Texas where he served until 1946. In 1952 Bob and Shirley built a house in Park Ridge, Il., after determining it had one of the highest rated public schools in the Chicago area. They had four boys, Earl, Keith, Doug and Evan. After her divorce, Shirley and her sons moved to Maryland. She worked as a home economics teacher at North Harford High School from 1970-1980. In 1980, she was asked to return to Chicago to be the caregiver for her widowed mother. After her mother died, she moved to Baltimore to be near her son Evan, his wife Tonette and their family where she greatly enjoyed being part of their family and her new neighborhood. Realizing at age 83 that she needed a different living arrangement, her family helped her move to Friends House Retirement Community, Sandy Spring, Md. Here she was a loved and respected community member at Friends House. Being an involved member of her extended family was very important to her. This tradition went back many generations. Both the Byrne side and Rittenhouse side of her family were important to her, to her parents, her grandparents, aunts, uncles and cousins. Their families supported them in many positive ways. Family reunions go back as far as she can remember and continue today. Shirley, with her sister Beth Vaughan and brother in Chuck Vaughan, organized family reunions in Maryland in 1976, 1986 and 1996. One of her sons, Keith, predeceased her. She is survived by sons Evan, Doug and Earl, Evan’s wife Tonette, Sally Borghardt, grandchildren Nicole Runde and her husband Zach Adams, Dylan Runde, Carrie Runde Paddock, her husband Kristaps Paddock and two great-grandchildren their daughter Ella and their son Graham. Memorial contributions can be made to the Friends House Retirement Community in Sandy Spring, MD. Arrangements are by Fellows, Helfenbein and Newnam. A memorial service will be held at a later date.

The family of Shirley Rittenhouse Runde created this Life Tributes page to make it easy to share your memories.