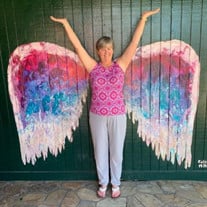 Sheryl Peterson Lepisto of Centreville, MD passed away Friday, March 4, 2022 at Vanderbilt Medical Center in Nashville, TN. She was 64. Sheryl was born Oct. 28, 1957 in Mt. Clemens, MI the daughter of Arlene “Stevens” Peterson and the late Jerome Peterson. She graduated from Kettering High School in 1975 and continued her education at Michigan Tech University graduating with a BS in Biology. Sheryl worked for Detroit and Northern Savings and Loan and in 1984 moved from Michigan to Maryland with her husband Tom. She became Director of Practice Support for Dow Lohnes in Washington, DC and worked there until her health forced her to retire in 2014. Sheryl enjoyed the water and fishing on their boat “Heartly Fishing”, she was active in Bible study and served in a leadership capacity for B.S.F. She was also very active in Maryland and USA Swimming as a swimming Official and sat on the Board of Directors for Maryland Swimming and was the recipient of the Maxwell Excellence Award for her contributions to local swim officiating. Above all she loved being around her children, especially her granddaughter, Wren. She is survived by her husband Tom Lepisto of Centreville, MD, two daughters, Erica Vinish (Douglas) of Chester, MD, Mallory Lepisto of Centreville, MD, one granddaughter, Wren Vinish of Chester, MD, her mother, Arlene Peterson of Gambrills, MD, one sister, Crystal Peterson of Gambrills, MD and one brother, Craig Peterson (Terry Burian) of Fernandina Beach, FL. A Celebration of Life will be held at a later date and will be announced by the family. In lieu of flowers contributions can be sent to the Advanced Heart Failure Program (AHFP) in Memoriam of Sheryl P. Lepisto. Checks should be mailed to: MedStar Washington Hospital Center,Office of Philanthropy, c/o AHFP in Memoriam of Sheryl P Lepisto, 110 Irving Street, NW Suite EB-1001,Washington, DC 20010

The family of Sheryl Peterson Lepisto created this Life Tributes page to make it easy to share your memories.

Send flowers to the Lepisto family.