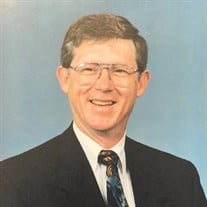 Shelby Barnes, 75, of Easton, Maryland, passed away on September 13, 2021. Shelby was born on December 11, 1945, to Forrest Barnes and Anne Farmer in Bedford, Indiana. When Shelby was just 19, he decided that he wanted to join the Navy and was stationed at the Naval Station in Brooklyn, NY. While serving in the Navy he met and fell for Susan, who he soon married in 1968. After his honorable discharge from the Navy in 1969, Shelby worked at New York Telephone as a Teletype Repairer and moved up within the company till he was a Systems Engineer. In March of 2005 Shelby and Susan moved to Easton, MD. Shelby and Susan had a passion for traveling together and were always planning their next trip. Shelby could talk forever to you. Getting just about anyone to open up to him and tell him their whole life story. He was a member of the Elks, VFW, American Legion and Saints Peter and Paul Church. Shelby loved his family. And was sure to take each of his grandchildren, with his wife Susan, when they turned nine years old to Disney Land for some extra magic in their lives. And held an unwavering faith in God, which he shared with those who surrounded him. Shelby is survived by his loving wife: Susan Barnes, of Easton MD; His daughter: Diane Barnes, of Kent Island, MD; His five grandchildren: Kaileigh, JJ, Charlie, Jacob, and Addison; His sister: Barbara A. Sullivan, of Tallahassee FL; and his nephews: Matthew and Patrick Sullivan. His sister-in-law: Carole Weihermuller and spouse George; his brother-in-law: Bill Kucinskas and wife Julie; his sister-in-law: Deb Kucinskas; and his nieces: Jennifer Ciasulla and spouse Damien and children, Julian and Adia, Jamie Perrotta and spouse Richie and children, Brandon and Ella. Shelby is preceded in death by his son: James Richard Barnes. A visitation will be held at Fellows, Helfenbein & Newnam Funeral Home P.A. in Easton, MD on Friday, October 8, 2021, from 5 PM to 7 PM, with an Elks Service starting at 5 PM. A service will follow at Saints Peter and Paul Church on Saturday, October 9, 2021, at 10:30 AM. The family requests that in lieu of flowers donations be made to the Elks Lodge, The VFW, The American Legion and Saints Peter and Paul, all located in Easton, MD

Shelby Barnes, 75, of Easton, Maryland, passed away on September 13, 2021. Shelby was born on December 11, 1945, to Forrest Barnes and Anne Farmer in Bedford, Indiana. When Shelby was just 19, he decided that he wanted to join the Navy and... View Obituary & Service Information

The family of Shelby Barnes created this Life Tributes page to make it easy to share your memories.

Shelby Barnes, 75, of Easton, Maryland, passed away on September...

Send flowers to the Barnes family.