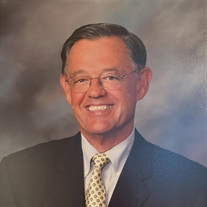 Seth Leonard Warfield, 78, passed away on April 16th, 2022, with his family at his side following complications after several heart surgeries. Seth was born in Washington, DC in the "old" Sibley Hospital, the youngest of three children of Anna and John (Jack) Warfield. He attended his neighborhood public schools and was graduated from Western high School (now Duke Ellington School for the Performing Arts). As a boy he participated in Boy Scouts, rising to the rank of Explorer. Seth was a graduate of Lehigh University (class of '65) where he majored in Industrial Engineering and stayed to complete a master's degree in Management Science (aka operations research). While at Lehigh he was a member of the Delta Phi Fraternity where he served in several leadership roles, including House Manager. He also was a member of the service organization APO. Following his graduate degree at Lehigh, Seth joined the Babcock & Wilcox Company at its headquarters in Barberton, OH. While in the Purchasing Department he rewrote a long-outdated purchasing manual. Within three years he rose to Manager of Industrial and Marine Purchasing where the was responsible for buying large, engineered power plant equipment and finely machined parts for the U. S. Navy's nuclear submarine reactors. In 1969 his father had a serious heart attack and asked Seth to leave B&W to return to Washington to take the helm of the family business, Jack's Roofing Company. Willing to help and to take a detour in his career, Seth moved his family back to Maryland. He had worked in the family business summers growing up, but was returning to manage, not to roof. His concern was that the business might be too small to support four families - his parents, his sister's and his brother's as well as his own and all the employees. His plan was to grow the family business by opening an adjunct roofing supply company, The Roof Center. Ultimately the supply business was incorporated as its own entity separate from the roofing business. Seth was president of both for a number of years. Over time, The Roof Center grew to 24 locations in Maryland, Virginia, Delaware and Texas. During those years Seth served on several corporate advisory boards for large manufacturing companies including CertainTeed, TAMKO and GAF. He was an early member of American Wholesale Ltd, a national buying cooperative and was its president for several years. When The Roof Center was sold to the United Company in 1998, Seth was retained to continue running the business. The Roof Center was sold again in 2001 and Seth decided to retire. A modest, gentle man, Seth enjoyed time with his family, often by the water. He and his family sailed on the Chesapeake Bay for many years and also escaped to their home in Southern Shores on the NC Outer Banks. There he was a member of Duck Woods Country Club for 30 years. Before retirement, Seth served on the Vestry and Finance Committee of Christ Church, Rockville. He also served as Chairman of the Board of Christ Episcopal School and for ten years on the Board of Governors of St. Andrew's Episcopal School in Bethesda, MD. His love of sailing drew him and his wife to move to Maryland's Eastern Shore where boating was their alternate waterfront home. Seth became active in Habitat for Humanity, helping to build houses with the "Thursday Crew" and to start the local Habitat Re-Store. He served on the Vestry, Finance and Endowment committees of Christ Church, Easton. Also, at Christ Church Seth participated in Kerygma and other Bible studies. He co-founded a men's non-fiction book group and was a member of the Talbot Investment Group. Ever the mariner, Seth belonged to the Chesapeake Bay Yacht Club, the Tred Avon Yacht Club and the Poplar Islands Yacht Club and was an active volunteer at all three. Seth is survived by his beloved wife of 55 years, Missy, his high school sweetheart. He also is survived by their two grown children, Heather Warfield Cooke (Ron) of Greenville, NC, and Peter Ives Warfield, MD (Amy) of Bethesda, MD. He also is survived by six cherished grandchildren: Ashley Cooke, Sydney Cooke, Emily Cooke, Hannah Warfield, Andrew Warfield, and Catherine Warfield. He is also survived by his older sister, Anna Eletheer Warfield Decker (Keith). He was predeceased by both parents and an older brother, John T. Warfield, Jr. A memorial service will be held at 11am on Saturday, May 14th, 2022, at Christ Church, 111 S. Harrison St. Easton, MD. A private interment will take place at a later date. In lieu of flowers, donations in his memory may be made to the Charcot-Marie-Tooth Association, PO Box 105, Glenolden, PA 19036. For online condolences, please visit: www.fhnfuneralhome.com.

Seth Leonard Warfield, 78, passed away on April 16th, 2022, with his family at his side following complications after several heart surgeries. Seth was born in Washington, DC in the "old" Sibley Hospital, the youngest of three children of Anna... View Obituary & Service Information

The family of Seth Leonard Warfield created this Life Tributes page to make it easy to share your memories.

Send flowers to the Warfield family.