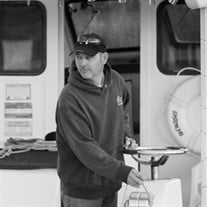 Captain Scott Robert Hartzell Sr. of Easton, MD formerly of Elkridge, MD left us here on earth to be with the lord on Saturday, October 30, 2021. He leaves behind a loving, devoted wife, Mariah Hartzell, two highly adored sons, Scott Hartzell Jr and Cole Hartzell, sister Shelley Lahn, and mother Shirley Hartzell. He was also a loving son in law, brother-in-law, uncle, godfather, and the best friend to many. He was born on April 3, 1978, in Baltimore, MD, the son of Shirley Ann Zepp Hartzell and the late Robert James Hartzell. Scott, more fondly known as "Scooter" to those he grew up with, was born April 3, 1978, in the quaint small town of Elkridge, MD. He spent his childhood fishing, hunting, working on cars and restoring his well-known blue 72’ chevy pickup with those who would go on to be lifelong friends. Growing up in a town where everyone knows each other, it didn't take long for Scott to set eyes on and fall for a not so sweet, very independent brunette who gave him a run for his money trying to get up the nerve to ask her out. They were meant for each other. Scott and Mariah, they made each other better. They went on to have two boys, Scott Jr and Cole and moved to Eastern Shore to support his dream of living on the water and getting his own boat. He went on to get his Captains license and owned a thriving fishing charter known as 'Catch'N Hell which most recently he ran out of the Tighlman Island. While fishing and being on the water was a big part of his life, he also recognized that he needed to assure his family had health insurance and a steady income year-round therefore continued to work full time as a dedicated employee for the Howard County Highways for the past 17 years as an operations supervisor. Scott's dream of living on the water and fishing wasn't a selfish one for sure and one that he couldn't do alone. He always had his wife's support to talk some sense into him when he needed it but more importantly it was something he got to teach and share with the most important young boys who thought he hung on the moon. There will never be a doubt how much he loved those boys or his wife. He has continued to shape them into the most helpful, caring, and hardworking young men. He was a very proud father and spending time with his sons no matter what they were doing was always his happiest place on earth. The smile he would get on his face watching them reel in their own fish, or tear up the yard on the four wheelers just to get yelled at from their mother, the first deer they got, the list goes on but the way he beamed with pride and enjoyed every moment with his sons and having fun with them was clearly the best times of his life. May we all remember his ornery smile and laugh and all the good times he gave us all. The Family would like to invite everyone to gather for a Celebration of Life in honor of Scott to be held Saturday, November 6th at the Elkridge Volunteer Fire Department from 1-5 any dessert you would like to bring to share would be much appreciated. There has been a go fund me set up for his wife and children https://gofund.me/5da176b9

The family of Scott Robert Hartzell Sr. created this Life Tributes page to make it easy to share your memories.

Send flowers to the Hartzell family.