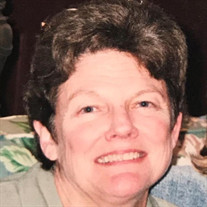 Sarah Willis Vermilye, 80, of Easton, MD passed away on Sunday, April 4, 2021 in her home after a day with all her family celebrating Easter. Sally, as she was known to family and friends, was born on June 27, 1940 to the late Macqueen Gibbs Willis and James McKenny Willis. Sally attended St. Timothy’s High School for 2 years and graduated from Easton High School in 1958. She received an Associate Degree from Marjorie Webster in 1960. After graduating she went to work for a United States Senator in Washington DC until 1964. In 1965 Sally married Easton native, W. Moorhead Vermilye whom she went to The Country School with years earlier. Sally and Moorhead settled for a short time in Trappe until they moved into their current home they built together on Waverly Island in Easton over 50 years ago. Sally went back to school in 1991 and received a Bachelor of Arts in Social Work from Salisbury State University. Immediately after graduating she began her Masters of Social Work at University of Maryland at Baltimore and graduated in 1994. Sally worked as a social worker for the Department of Social Services in Caroline County and later for Talbot County. After receiving her LCSW-C credentials she worked at For All Seasons in Easton from 1994 – 2002. Upon “retiring” she began working at Eastern Shore Psychological Services in Easton from 2002 – 2010. Sally enjoyed staying active in Talbot County as evidenced by the many boards upon which she served over the years such as the Historical Society of Talbot County, Pickering Creek, Planned Parenthood of Maryland, and the Macqueen Gibbs Willis School of Nursing Advisory Committee. Sally always exhibited a heart for the less fortunate and became active on the boards of social organizations such as CASA (Court Appointed Special Advocate), Neighborhood Service Center, Talbot County Advisory Board of Social Services, Mental Health Association of Talbot County and founding director of Talbot Community Connections. In addition, she volunteered with the Junior Auxiliary of the Memorial Hospital. Sally was an avid gardener not only on her property but in the community as well. With an eye for design and detail she created some spectacular gardens and transformed their property. She was a longtime member of the Talbot County Garden Club, where she participated in numerous committees including Garden Therapy, conservation and membership. She served as the Club’s liaison to the Historical Society. Sally was an active member of the Third Haven Friends Meeting in Easton. She was involved with many aspects of the meeting and served on different committees’ such as the property and grounds and library. She is survived by her husband W. Moorhead Vermilye, her children Macqueen Vermilye Parker, (Keith) of Mt. Airy, James Moorhead Vermilye of Arnold, Laura Vermilye Wroten of Easton, her 4 grandchildren Sarah Parker, Molly Vermilye, Madison Parker, Jay Vermilye, her sister Virginia Willis Sappington and numerous nieces and nephews. She is pre-deceased by her sister Ethel Willis MacGill. In lieu of flowers, memorial contributions can be made to Third Haven Meeting House at 405 S Washington St. Easton, MD 21601 and Talbot Community Connections at PO Box 2615 Easton, MD 21601. A memorial service will be held for Sally Vermilye on May 22, 2021 at 12 noon at Third Haven Meeting House. With Governor Hogan's most recent announcements lifting restrictions, more seating will be available for guests. Services will still be streamed via Zoom for those wishing to join virtually. Join Sally's Memorial via Zoom: https://us02web.zoom.us/j/82713811417?pwd=STBUdmtKS1B5QTIyNW82RGRqWmhGZz09 Meeting ID: 827 1381 1417 Passcode: 617228

Sarah Willis Vermilye, 80, of Easton, MD passed away on Sunday, April 4, 2021 in her home after a day with all her family celebrating Easter. Sally, as she was known to family and friends, was born on June 27, 1940 to the late Macqueen Gibbs... View Obituary & Service Information

The family of Sarah W. Vermilye created this Life Tributes page to make it easy to share your memories.

Sarah Willis Vermilye, 80, of Easton, MD passed away on Sunday,...

Send flowers to the Vermilye family.