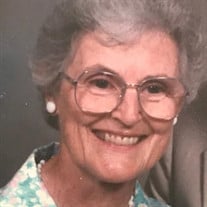 Sarah (Sally) Reidinger of Chestertown, MD entered into larger life on May 20, 2021 at Heron Point Chestertown, MD. She was 97. Sally was born in Ithaca, NY on April 14, 1924, the daughter of the late Hugh Daniel and Madeline Church Reed. She was a graduate of Ithaca High School class of 1941 and Cornell University class of 1945, with a bachelor of arts degree in psychology. In 1946, Sally married Raymond Cuyler Reidinger. They later moved to Delaware where they raised their family, spending several years in Brevard, NC. Sally was active, serving as a deacon in the Newark Presbyterian Church, and a member of the philanthropic organization PEO and the AAUW. She volunteered at the Newark Day Nursery and Ashland Nature Center. Sally and Ray moved to Heron Point in Chestertown, MD in 1991, where they became active in the Presbyterian Church of Chestertown. They also enjoyed traveling. Sally stayed in touch with her sorority sisters of Kappa Alpha Theta and the local Cornell Club. Sally enjoyed cooking, sewing and gardening and was a devoted wife, and beloved mother, grandmother and great-grandmother. She was predeceased by her husband of 63 years, in 2010. She is survived by her son, William Reidinger (Kathleen) of Newark, DE; daughters Madeline Johnson (Gregory) of Landenberg, PA and Carolyn Shields (Daniel) of Newark, DE. She was also blessed with six grandsons, 2 granddaughters, four great granddaughters and a great grandson on the way. A memorial service will be held on June 12, at 10o’clock at the Presbyterian Church of Chestertown, with the Revs Joel Tolbert and Anne Ledbetter officiating. In lieu of flowers, contributions in her name may be made to Compass Regional Hospice, or the Presbyterian Church of Chestertown.

Sarah (Sally) Reidinger of Chestertown, MD entered into larger life on May 20, 2021 at Heron Point Chestertown, MD. She was 97. Sally was born in Ithaca, NY on April 14, 1924, the daughter of the late Hugh Daniel and Madeline Church... View Obituary & Service Information

The family of Sarah Reed Reidinger created this Life Tributes page to make it easy to share your memories.

Send flowers to the Reidinger family.