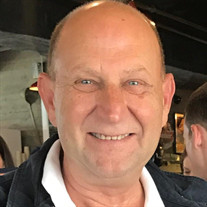 Samuel Winfred Anderson, III, died after a year long battle with pancreatic cancer on Sunday, April 24, 2022 surrounded by his family. Born June 19, 1959, Sam as he was known to most, was 62 years old. Sam was born in Mt. Holly, New Jersey to Lucille and Samuel W. Anderson, Jr. Sam grew up in Annapolis, Maryland and graduated from Annapolis High School in 1977. He later graduated from University of Maryland Baltimore Campus in 1984. Sam was a Certified Public Accountant and had his own firm in Easton, Maryland, Anderson & Company, LLC. Sam, like most people from Annapolis, enjoyed being on the water. As a child, he crabbed on Spa Creek with his friends from the Murray Hill neighborhood. Sam often spent time at the Harrington Casino in Delaware with his parents and sister, Emily. Traveling was another passion of Sam’s. Skiing trips with his children or taking a cruise were favorite memories. In recent years he had traveled to New Orleans as well as a Fireworks Convention where he literally had a blast! Walking his daughter down the aisle at her wedding this past October fulfilled a lifelong dream. Working and crunching numbers made Sam happy. Clients that became friends after years of working together was not uncommon. For a CPA, it is fitting to pass in April, closing yet another tax season. Sam was preceded in death by his mother, Juanita Lucille Anderson. She most certainly was there at heaven’s gates to welcome him home. Sam is survived by his father, Samuel W. Anderson, Jr., of Annapolis, Maryland. His sisters, Emily Davidson of Annapolis, Maryland and Jennifer Blose (Robert) of Winchester, Kentucky. His children, Jordan S. Anderson (Taylor) of Trappe, Maryland and Jenna A. Joseph (Casey) of Odenton, Maryland. His grandsons, who were the light of his life, Colton and Caden Anderson of Trappe, Maryland. Sam is also survived by many nieces and nephews who loved and adored him. Sam was always quick witted and loved to laugh. He will be missed forever, but his legacy will live on through his children and grandchildren and in the hearts of all who loved him. A visitation will be held at Fellows, Helfenbein, & Newnam Funeral Home on Monday, May,2, 2022 from 10:00 AM -12:00 PM. A funeral service will begin at 12:00 PM with burial to follow in Oxford Cemetery. Memorial donations may be made to Talbot Hospice in Easton, Maryland.

Samuel Winfred Anderson, III, died after a year long battle with pancreatic cancer on Sunday, April 24, 2022 surrounded by his family. Born June 19, 1959, Sam as he was known to most, was 62 years old. Sam was born in Mt. Holly, New Jersey... View Obituary & Service Information

The family of Samuel Winfred Anderson III created this Life Tributes page to make it easy to share your memories.

Send flowers to the Anderson family.