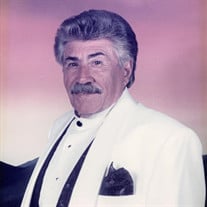 Salvatore Francis Vizzini of Stevensville, MD died Friday April 9, 2021 in Calabash, NC surrounded by his family. Born on February 6, 1926 in Maryland he was the son of the late Phillip and Phyllis Damico Vizzini. He was 95 years old. Salvatore grew up in Baltimore with his parents. He attended Mount Saint Joseph High School for two years where he played ice hockey and then transferred to Severn Preparatory School in Severna Park, MD, where he graduated. He then attended the University of Maryland, played lacrosse, and graduated with a Civil Engineering degree. After college, he attended Kingspoint Officer Candidate School. After that, he entered the Navy as an officer and went on to serve his country with honor and distinction. He retired from the Navy as an Lt. Commander, served in the Naval Reserve as well as a Commander in the Coast Guard Auxiliary. After his honorable discharge from the Navy, he joined his father in the family business of Philip Vizzini & Son Contractors and years later, had his own business, S.F. Vizzini, Civil Engineer. Salvatore’s passion was always on the water with his family and friends on his boat. He got his Captain’s license and owned and operated his beloved “Sea Chanty” for over 50 years which he recently sold. He taught navigation at the USNA, was a licensed appraiser and taught the appraisal course at Anne Arundel College, a licensed small aircraft pilot, and served on the Board of Westview Savings and Loan. After his retirement, he started experimenting with watercolors and oils and painted to create some of the most beautiful artwork of nature’s beauty of the seas. Along with his parents, Salvatore is predeceased by his son, Salvatore Francis Vizzini, Jr. in 1975. Survived by his beloved wife Patricia P. Vizzini of Stevensville, his children Philip Vizzini (Vivienne) of Myrtle Beach, John J. Vizzini (Lynn Carr) of Sebyville, DE, Phyllis V. Adam (John) of Westminister, Rosaria Vizzini of Selbyville and Angela V. Lathroum (Scott) of Bishopville MD, Stepdaughter Cynthia Ogden (Bob Sams) of Greensboro, MD, thirteen grandchildren and six great-grandchildren, as well as many loving cousins and friends. A visitation will be held on Wednesday, April 21st from 2PM to-4PM and 6PM to 8PM at Fellows, Helfenbein & Newnam Funeral Home 106 Shamrock Road Chester, MD 21619. A funeral mass will be held on Thursday April 22 at 11:00 am at St. Christopher’s Catholic Church 1861 Harbor Dr, Chester MD 21619. Entombment will follow mass and be held in Lorraine Park Cemetery, 5608 Dogwood Rd, Gwynn Oak, MD. In lieu of flowers, the family requests that contributions be made to The Chesapeake Bay Foundation www.cbf.org. Online condolences can be made at www.fhnfuneralhome.com

Salvatore Francis Vizzini of Stevensville, MD died Friday April 9, 2021 in Calabash, NC surrounded by his family. Born on February 6, 1926 in Maryland he was the son of the late Phillip and Phyllis Damico Vizzini. He was 95 years old. Salvatore... View Obituary & Service Information

The family of Salvatore Francis Vizzini created this Life Tributes page to make it easy to share your memories.

Send flowers to the Vizzini family.