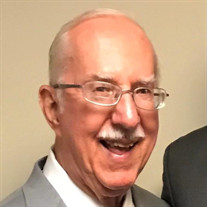 Russell Newlin Abel, age 91, of Church Hill, MD passed away on April 11, 2022 of natural causes. He was born in Upper Darby, PA on October 22, 1930. He is preceded in death by his parents Carlton Henry Abel and mother, Grace Cecelia Williams Abel, his brother William (Bill) Dunlap Abel, first wife Mary Elizabeth (Mary Beth) Appleby Abel and his second wife Helen Margarette Crook Abel. Russell is survived by his two daughters, Sharon Elizabeth Abel and Elizabeth (Betsy) Anne Abel - Talbott, his son-in law James Steven Talbott and his grandsons Logan Forrest Talbott and Duncan Rhys Talbott. Russ Abel graduated from the University of Delaware with a BS in Agriculture in 1952 where he met is first wife of 47 years Mary Elizabeth Appleby. Russell N. Abel was a Private in the Army for 2 years during the Korean War stationed in the Panama Canal Zone. His wife, Mary Beth later joined him in Panama where their first daughter, Sharon E. Abel was born. Later, after returning home to the US, his second daughter, Elizabeth (Betsy) Anne Abel was born in Wilmington, DE. Russ Abel earned his living as a; Gas Station Attendant at Abel’s Garage, Elwyn, PA, Supervisor, New Castle Co. DE, Food and Drug Administration Inspector, Federal Government, Consumer Product Safety Regional Director, Federal Government, Water Tester for Hydro Test Inc., Manager Rock Hall Lumber Company , Pastor New Covenant Church in Queenstown, MD, Head Master New Covenant Christian Academy, in Queenstown, MD and a Leader in the Royal Rangers Scouting Organization to finally retire to his home in Church Hill, MD to enjoy the view from his front porch and faithfully feed all the birds that came to visit his property. Together with a master carpenter and a small crew Russ was able to build his Church Hill residence. Russ and Mary Beth shared a common interest in Genealogy and History which resulted in the writing of Mendenhall – Newlin Alliance, self-published in 1989, a book on the Mendenhall / Newlin families as they are related to the Abel family history in the United States. Russ had a keen interest in travel and visited much of the United States including Alaska and Hawaii touring the National Park systems with his family and in later years travelled to Costa Rica, Panama, Ireland, Peru, Galapagos Islands, and Africa. Celebration of Life will be held at Hope Fellowship, 892 Washington Ave. Chestertown, MD 21620 on May 28, 2022 at 11:00 am followed by lunch at the church. Contributions in lieu of flowers can be made to Hope Fellowship, Chestertown, MD.

Russell Newlin Abel, age 91, of Church Hill, MD passed away on April 11, 2022 of natural causes. He was born in Upper Darby, PA on October 22, 1930. He is preceded in death by his parents Carlton Henry Abel and mother, Grace Cecelia Williams... View Obituary & Service Information

The family of Russel Newlin Abel created this Life Tributes page to make it easy to share your memories.