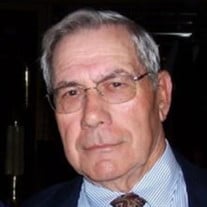 Robert “Paul” Turkington, of Trappe, passed away on March 26, 2022, at home. He was 87. He was born on March 18, 1935, in Denton, MD, to the late Reverend Thomas J. and Juanita Turkington. After graduating from Denton High School in 1953, he married the late Dolores Shortall on November 7, 1953, and together they had three sons. Paul retired from the Maryland Marine Police Department of Natural Resources on April 1, 1993, after 25 years of service. Of his many hobbies, he enjoyed decoy carving, crabbing, fishing, billiards, and woodworking. He is preceded in death by three brothers, Tom Jr., Bill, and Harry Turkington along with two sisters, Emma Shehan and Jean Turkington. He is survived by his current wife of 29 years, Virginia (Ginny) Turkington, two sons, Robert P., Jr., and wife Donna of Nathalie, Virginia, and Timothy J. Turkington of Bethlehem, Maryland, stepchildren, Kathy Gannon and her husband Gary of Easton, Mike Mullikin and wife Cheryl of Onstead, MI, Matt Mullikin and his wife Cathy of Wetumpka, AL, 12 grandchildren, 18 great-grandchildren, and two sisters-in-law, Mary Turkington of Denton and Carolyn Walker of Easton. A son, Terry A. Turkington, and a stepson, Pat Mullikin, preceded him in death. There will be a viewing from 10 – 12 noon, on Friday, April 1, 2022, at Fellows, Helfenbein, and Newnam Funeral Home followed by a service beginning at 12 PM. Burial will be at Old Spring Hill Cemetery. Robert Turkington III, Heath Turkington, Daniel Turkington, Kyle Gannon, Steven Todd, and Dallas Lister will be serving as pallbearers. Friends and family are welcome back to Paul’s home in Trappe after services for a celebration of life. In lieu of flowers, donations may be made to Talbot Hospice, 586 Cynwood Drive, Easton, MD 21601, or the Alzheimer’s Association at https://act.alz.org.

The family of Robert "Paul" Turkington Sr. created this Life Tributes page to make it easy to share your memories.

Robert “Paul” Turkington, of Trappe, passed away on March 26,...

Send flowers to the Turkington family.