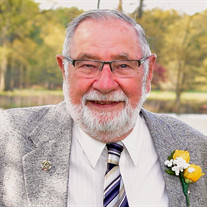 Robert E. Ritchie, “Bob” of Rock Hall, Maryland died on March 22, 2022 at his home. He was 90. He was born in Philadelphia, PA on February 12, 1932, the son of the late R. Elmer and Catherine Carter Ritchie, and brother of six. He was a 1950 graduate of Collingdale High School and enlisted in the U.S. Navy. He married Dorothy Wenner on May 30, 1953. Mr. Ritchie served in the Navy Reserves as a Quartermaster on a submarine from 1950 until his honorable discharge in 1963. He resided in Collingdale until moving to Glen Mills, PA in 1963. Mr. Ritchie owned and operated Gillespie and Ritchie Inc., a plumbing, heating, and HVAC company for over 50 years. He was a member of Concord Lodge #625 where he served as Worshipful Master in 1991. He moved to Rock Hall, MD in 1993 and joined Chester Lodge #115. His Masonic career spanned over 60 years. He was a member of Wesley Chapel. He was also a member of Sgt Preston Ashley American Legion Post #228 in Rock Hall where he served as Chaplin. He was a past member of Chestertown Elks Lodge #2474, was an Amateur Radio Operator, and EMS Club member, and was very involved in Boy Scouts eventually becoming Scoutmaster of Troop 260, then started and skippered Sea Scout Ship 260 in Pennsylvania. Mr. Ritchie enjoyed flying and once owned and flew a Piper Cub, he enjoyed bird carving, fishing, hunting, cooking, skiing, radio-controlled planes and boats, boating, and extensive travel with his wife. Simply put, he enjoyed life and could do just about anything. In addition to his wife, he is survived by a son: Robert “Bob” E. Ritchie III (Jennifer) of Rock Hall, MD, a daughter: Ellen Louise O’Donnell (Edmund Kollhoff) of Chester Heights, PA, and two grandchildren: Shannon Dorothy O’Donnell and Michael Anthony O’Donnell 2nd. Services will be held privately. In lieu of flowers contributions may be made to Compass Regional Hospice 160 Coursevall Dr Centreville, MD 21617, Sgt. Preston Ashely American Legion Post #228 21243 E. Sharp St. Rock Hall, MD 21661 or Rock Hall Volunteer Fire Company P.O. Box 577 Rock Hall, MD 21661. Arrangements by Fellows, Helfenbein, and Newnam Funeral Home, www.fhnfuneralhome.com

The family of Robert Elmer Ritchie created this Life Tributes page to make it easy to share your memories.

Send flowers to the Ritchie family.