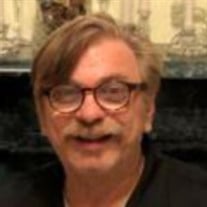 Robert Casimir Medura, Jr. of Easton lost his fight with cancer on September 27, 2021. Robert’s (Bobby), goal was to make everyone he met smile, a goal that he accomplished with quirky jokes, and a broad smile. Robert’s life will be celebrated in a Celebration Of Life from 1:00 pm to 4:00 pm on December 4th, 2021, at the Bishop’s House Bed and Breakfast in Easton, Md. Those who wish to attend are asked to call the Bishop’s House at (410) 820-7290 so that we may estimate the number of participants. Robert was born in Baltimore on November 4th, 1960. After graduating from Dundalk Senior High in Baltimore County on June 2, 1978, he worked in construction and apprenticed to the plasterer’s union. Bobby’s apprenticeship led him to specialize in Ornamental Plaster, creating and restoring ceiling medallions, crown molding, friezes, and decorative domes. His ornamental plastering career lasted for more than thirty-years where he worked on many historic buildings in the New Jersey, Baltimore, and Washington areas including: the Treasury Building; the dome at the Smithsonian Natural History Museum; the National Gallery of Art, the Sheraton-Carlton Hotel (now the St. Regis Hotel); the Cosmos Club in Washington, DC, Whitehall Manor, and the Naval Academy. In 1987, Robert accepted an engagement to restore decorative plaster elements at the Bishop’s House Bed and Breakfast in Easton. Bobby’s restoration work at the Bishop’s House allowed him to add period-appropriate plaster elements of his own design based on plaster designs from other buildings in which he worked. In 2003, Bobby became an Eastern Shore resident and expressed limited interest in working “across the bridge,” choosing to express his artistic ideas in other media. Robert turned his skills in photography, drawing, and woodworking to establish Medura Originals, producing functional wood art offered for sale or through private commissions for custom designs. Robert started small, first designing, and producing cutting boards, candle holders, and then expanding into custom-made furniture. Robert used several venues to reach his target market: tables at the pre-Covid open air Saturday Easton Market, the Waterfowl Festival, and Easton’s Academy of the Arts consignments with Bay-Star in Easton, and the Etsy.com website. Whenever you saw him, regardless of whether business was good or bad, you would be greeted with Robert’s broad “hello” smile. Robert is survived by his Eastern Shore Family: Diane Laird-Ippolito, John Ippolito, Elizabeth Webster, Augusta Canfield (Robert’s fiancée), and numerous friends and associates; and his Western Shore relatives: father Robert C. Medura Sr., mother Sandra (Knowles) Medura (deceased); sister Nicole Nichols and husband John Nichols, his nephew Morgan Nichols and his niece and God daughter Halle Nichols; brothers Scott Medura, his wife Dina, and niece Olivia; and Kelly Medura and his wife Dohee.

Robert Casimir Medura, Jr. of Easton lost his fight with cancer on September 27, 2021. Robert&#8217;s (Bobby), goal was to make everyone he met smile, a goal that he accomplished with quirky jokes, and a broad smile. Robert&#8217;s life will... View Obituary & Service Information

The family of Robert Casimir Medura Jr. created this Life Tributes page to make it easy to share your memories.

Send flowers to the Medura family.