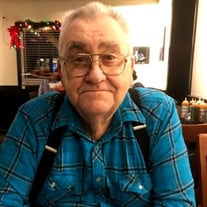 Robert A. Horner, “Bob”, passed away on Wednesday, March 3, 2021 at the UMSMC in Easton, Maryland. He was 78. Bob was born in Salisbury, MD on October 6, 1942. He was the son of the late Harold Horner and Eleanor Golt Horner. He was a 1960 graduate from Easton High School. Bob served proudly in the Maryland National Guard, 29th Infantry Division from 1962-1969. He was a member of Oasis Covenant Church in Easton, Easton Volunteer Fire Company throughout the 1960’s, and the Train Collector’s Association since 1972. Bob worked for T. Earl Ewing Equipment & Hardware in Easton from 1960-1966, where he repaired John Deere Tractors. He worked for Talbot County Public Schools as a Bus Contractor/Driver for many years from 1970’s-1980’s; Bob was also a driving instructor for TCPS. He especially enjoyed his time transporting students on Bus 30, to and from Oxford. From 1989-1992, Bob volunteered with the Chesapeake Railroad, operating the brush-clearing machine along the railroad between Clayton, DE and Easton, MD. During the 1990’s, Bob worked for his classmate, Earl Swann, in his farming operation. From 1994-1995, he worked for Tom Cohee at Barker’s Landing. But, the most significant amount of time working, was spent working for his parents at the H&G Restaurant in Easton until 1980, when he purchased it from them. He owned the restaurant from 1980-1990 and then again from 1999-2005. He loved visiting and talking with friends, telling stories and reminiscing. Bob is survived by his children: Robb Horner (Beth) of Easton, MD, Tyler Horner (Raye Ellen) of Easton, and Farley Cummings (Estelle) of Salisbury; grandchildren: Kendall Smith (Ben), Philip Horner, Caroline Horner, Connor Cummings, Shelby Cummings, Andrew Henry, and Garrett Spalin; sisters, Kay Parkinson of Eden and Joan Coble (Lester) of North Carolina; numerous great-grandchildren, nieces, and nephews. In addition, he is survived by three special friends: Bobby Boone of Moreno Valley, CA, Joe Hunter of Ridgely, MD, and Ed Rosemary of Preston. In addition to his parents, Bob was preceded in death by his daughter, Pam Spalin, and his brother-in-law, Clifford Parkinson. A visitation will be held on Friday, March 12, 2021 from 6-8PM at Fellows, Helfenbein & Newnam Funeral Home, P.A. 200 S. Harrison St. Easton, MD 21601. A memorial service will take place on Saturday, March 13, 2021 at 11AM at Oasis Covenant 215 Goldsborough St. Easton, MD 21601. The Horner family wishes to express their heartfelt gratitude to all the University of Maryland Shore Medical Center staff who cared for Bob recently; in particular, Dr. Robert Hannah, Dr. Kevin Tate, Dr. Christina Turner, and Dr. Peyman Otmishi. In lieu of flowers, memorial contributions may be made to Oasis Covenant https://oasiseaston.breezechms.com/give/online or Talbot Humane https://www.talbothumane.org/donate/.

The family of Mr. Robert "Bob" A. Horner created this Life Tributes page to make it easy to share your memories.

Send flowers to the Horner family.