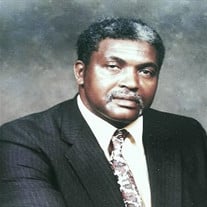 Robert Edward Ash, 80, of Millington, MD passed away Wed. April 22, 2020 at Compass Regional Hospice in Centreville, MD. Mr. Ash was born Aug 17, 1939 in Middletown, DE the son of the late Edward Ringgold and Mary Frances “Ash” Benson. Robert attended school through the 11th grade and left before graduating to join the United States Army where he served his country for 4 years. Once he returned home he continued his service to his country by serving in the National Guard. He married his wife, Maxine in 1965. Robert worked for General Motors from 1966 to 1999 and retired after 33 years. He was a member of Union Bethel AME Church in Cecilton, MD where he was a devoted trustee for many years. Robert loved being outside working in his yard. He also enjoyed watching football, baseball and Westerns on television. In addition to his parents he was preceded in death by two sisters, Annette Blake and Charlotte Livingston. He is survived by his wife of 55 years,Maxine Ash of Millington, MD, two sons, Jeffrey Ash (Charisse) of Mt. Airy, MD, Jason Ash of Millington, MD, two brothers, Alan Ringgold (Claudette) of Middletown, DE, James Benson Jr. (Patti) of Wilmington, DE, five sisters, Janice Garrett (Felix) of Newark, DE. Constance Saunders (Wilbert) of Newark, DE, Marjorie Fields of Smyrna, DE, Patricia Groce (Colbert) of New Castle, DE, Marilyn Benson of Brazleton, GA and two grandchildren, Evan Ash of Atlanta, GA , and Faryn Ash of Pittsburg, PA. A visitation will be held Saturday, May 2, 2020 from 12-3 pm at Fellows Family Funeral Home 370 Cypress St. Millington, MD. A private ceremony will be held on Sunday, May 3, 2020 at Union Bethel AME Cemetery. In lieu of flowers contributions can be sent to Union Bethel AME Church c/o Maxine Ash P.O. Box 114 Millington, MD 21651. The family will hold a public Celebration of Life at a later date after the COVID 19 pandemic is over. Online condolences can be sent to the family at www.fhnfuneralhome.com

The family of Mr. Robert Edward Ash created this Life Tributes page to make it easy to share your memories.

Send flowers to the Ash family.