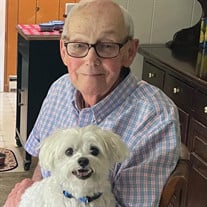 Richard Lamar Seigman passed away on Wednesday, August 4, 2021. He was 82 years old., Richard was born on July 16, 1939 in Glen Rock, Pennsylvania, to Edna Grace Meyers Seigman and Griffith Elwood Seigman. At an early age, Richard showed an interest in music, studying trombone, piano and voice. During high school he was a member of his high school band, orchestra, and chorus, and received the Roland F Seitz Musical Achievement Award as an outstanding high school musician. A 1958 graduate of Susquehannock High School, Glen Rock, PA, he was very active in local instrumental and vocal groups, including the Glen Rock Band and the Glen Rock Carolers Association. In the fall of 1958, he entered the Shenandoah Conservatory of Music, Dayton, VA, where he majored in voice, with minors in trombone, bassoon and music education. During this time, Richard composed “Piece #1 in F Minor” for the Brass ensemble. In 1962, Richard earned his Bachelor Degree in Music Education, and accepted a position with the Washington County Board of Education, Marietta, Ohio, as music instructor. In 1964, he was drafted into the United States Army, and following basic training, was accepted as a member of the 36th U.S. Army Band, and was a member of the marching, concert and dance bands. Following his honorable discharge in 1966, Richard accepted a music teaching position with Caroline County Board of Education, Denton, MD, and began teaching at Preston. It was here that he met his future wife, Marilyn J. Russell. who was also a first year teacher. They married on December 21, 1968. Richard became the Instrumental Music Director for Colonel Richardson High School, leaving that position in 1979. He joined Allen Family Foods, Cordova, MD as a Quality Control Technician, and thereafter as a Laboratory Technician, until his retirement in 2013. Throughout his life, Richard loved dogs, and enjoyed collecting model trains. He also enjoyed working on family history, compiling extensive genealogy records. Richard is preceded in death by his parents, Edna Grace (Myers) Seigman and Griffith Elwood Seigman, and by his wife of 50 years, Marilyn J. (Russell) Seigman. He is survived by his brother-in-law, William D. Russell, III, and his wife, Marilyn P. Russell, sister-in-law, Marie E. (Russell) Hill, and her husband, F. Kingsbury Hill, and brother-in-law, Richard. W. Russell and his wife, Susan (Shortall) Russell, and their children. He is also survived by dear friends Patricia (Cole) Chapman and James Chapman, and their children, as well as special cousins, Judi Myers Fischer, Shelva Meyers Kelley, Laverne Wetzel and wife Deanna. A graveside service will be held on Wednesday, August 18, 2021, at 11:00 a.m., Denton, MD. In lieu of flowers, memorial donations may be made to the Humane Society of your choice.

The family of Mr. Richard Lamar Seigman created this Life Tributes page to make it easy to share your memories.

Send flowers to the Seigman family.