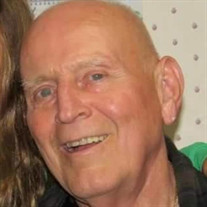 Richard “Dick” Oliver Pidcock passed away peacefully at home, surrounded by family, on April 26, 2022 at the age of 77. Dick was born in Flint, MI on September 6, 1944 to parents George and Florence Pidcock. He grew up in Flint, graduating from St. John Vianney High School in 1963. Right after graduating, he joined the Marine Reserves and began working for General Motors. He married Lynn Gorsalitz and daughter Michell, on July 25, 1980. They resided in Michigan eventually moving to Maryland in 2013. He enjoyed golfing, hunting, and raising hell wherever he went. He was a member of the American Legion and the Moose Lodge. He was preceded in death by siblings George, James, Francis, and Joyce. He is survived by his wife, Lynn Pidcock; their daughter, Michell Jordan (Matthew); sisters, Patricia Rodgers and Louella Cashin; grandchildren, Sarah, Abagael (Liam), and Molly; as well as many nieces, nephews, and cousins. Any donations can be made to the Caroline County Humane Society.

The family of Richard Oliver Pidcock created this Life Tributes page to make it easy to share your memories.

Send flowers to the Pidcock family.