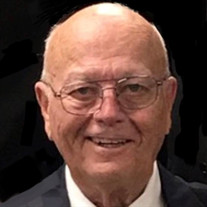 Richard Llewellyn Crowley, 91, passed away peacefully surrounded by friends and family at his home in McDaniel Maryland, on October 5, 2021. In his final hours he was given a military tribute by local veterans that was wonderful. A graduate of Thorton Academy, he then attended University of Maine briefly before Enlisting in the United States Marine Corps, when war was eminent. Richard was a decorated USMC Veteran, receiving 2 Purple Hearts, the good conduct medal, UN service medal, national Defense service medal, and the Korean service medal all while serving in the Korean War. He was a lively, fun loving son, husband, father and friend to many. He grew up surrounded by several close cousins and extended family members. He was grateful for his humble beginnings as a lobsterman’s son. He was proud of his time working alongside his family at Crowley’s Lobster Pound. He met the love of his life , Barbara Reid Smith, delivering lobsters to the Smith residence in Biddeford Pool. You could say he took the Crusher claw of the lobster, grabbed her, and never let go. While on leave, in August of 1952, he asked Barbara to marry him, and within a week they were married in Saco, ME on August 15, 1952. His cousin Marshall Goodwin and his wife Diane served as their Best man and Matron of honor. They then relocated to Camp Lejeune, North Carolina, where he served out the remaining time in the US Marine Corps.He was honorably discharged in January of 1954. The next move took them to Charlottesville, Va where he attended the University of Virginia. He graduated with a BS degree in 1958. Sons Richard jr and David were both born during that time. Upon graduation, they moved to Webster, MA where he accepted a job as a scientist at Fisher Scientific. While in the lab, he discovered that coffee and OJ could be freeze dried and thus the birth of freeze dried coffee and Tang. Son Mark and Daughter Linda were born during that time in Webster. He then took a job at Brown University as a purchasing agent. Several years later he was offered a position at Children’s hospital in Boston, where he worked until 1972. He then made the move to State College, PA where he accepted a position At Pennsylvania State University. He retired in 1994 as Vice President of Purchasing. During his PSU Career, he served as President of the National Association of Education Buyers. Some of Richard’s personal accomplishments was that he was an Eagle Scout at age 12, a Little league coach, 32° Mason, Lifetime member of VFW and attended many parades and presentations. Active in the Marine Corps League and participate in the annual Toys for Tots Drive. A member of a Bowling League, sung in a Barbershop Quartet, a photographer, developing film in his home dark room to digital technology, Participated in slide clubs and art exhibitions. Making custom frames and mats being selected many years as an exhibitor at the Penn State Arts Festival. He taught photography classes at many organizations. He captured his time in Korea with the use of his little Brownie camera. He was President of the Holiday Ramblers RV Club for several years and would hold rallies in various states. He was very clever with words and wrote many poems, one which was published in the paper during his deployment to Korea. Richard and Barbara would spend each Winter in Naples, Fl where they made several close and lifelong friends at The Waves (Paradise Point) resort. They traveled the world extensively. Visited all 50 States and even renewed their wedding vows in the Arctic Circle. All Because Two People Fell in Love…. Richard is survived by his sons: Richard Llewellyn Crowley Jr (Kathy), of Howard, PA; David Burton Crowley (Ora Rehm), of Clayton, NC; Mark Brian Crowley (Laura), of Boalsburg, PA; his daughter: Linda Crowley Warner (Bradley), of McDaniel, MD; his sister: Barbara Crowley; and brother: Wayne Crowley. He was preceded in death by his wife Barbara Reid (Smith) Crowley. He has 11 Grandchildren and 5 Great-grandchildren. Donations can be made in his honor to Wreaths Across America. https://www.wreathsacrossamerica.org/ Services to follow at a later date at Arlington National Cemetery in Arlington,Virginia

Richard Llewellyn Crowley, 91, passed away peacefully surrounded by friends and family at his home in McDaniel Maryland, on October 5, 2021. In his final hours he was given a military tribute by local veterans that was wonderful. A graduate... View Obituary & Service Information

The family of Richard L. Crowley created this Life Tributes page to make it easy to share your memories.