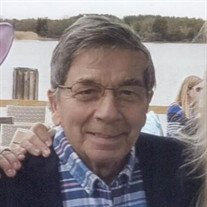 Richard R. Crotsley, formerly of Easton, MD, passed away on Tuesday, June 8, 2021. He was 88. Born in Baltimore, MD on April 20, 1933, he was the son of the late Raymond Crotsley and Rose Crotsley. Richard graduated from Paterson Park High School, class of 1952, and began working for Waverly Press in Baltimore, MD. On July 20, 1952, he married Vera Taylor, of Baltimore, MD. In 1961, they moved to Easton, MD. Richard continued to work for the same company for over 45 years and retired in 1996. In 2004, he and his wife moved to Ocean Pines, in Berlin, MD. While living in Berlin, Richard enjoyed his retirement spending time with family at the beach, working on the boardwalk trolly and eating crabs. He was a member of the Lafette Lodge AF&AM in Baltimore, MD. Since 1972, Richard was both an officer and volunteer for the Easton Waterfowl Festival (until he moved to Berlin, MD) Richard was a member of Christ Episcopal Church, the Elks Lodge, the Lions Club in Easton, MD, and The American Legion in Ocean City, MD. He is survived by children, Mark Crotsley (Kandy) of Tuscola, TX and Valerie Haddaway (Tom Marx) of Easton, MD. Three grandchildren, Megan Schulte (Dave), Mark Crotsley Jr. (Brittany) and Eric Crotsley (Christi), Four great grandchildren and two sisters, Evelyn Krebs (Charles) and Ruth Diblasi. In addition to his parents, he was preceded in death by his wife of 64 years, Vera Crotsley, and their son, Brian Crotsley as well as daughter in law Wendy Lyn Crotsley. A visitation will be held on Sunday, June 20, 2021 from 12-1PM at Fellows, Helfenbein & Newnam Funeral Home, P.A. 200 S. Harrison St. Easton, MD 21601. Burial will follow at the Oxford Cemetery in Oxford, MD. In lieu of flowers, donations may be made to the Waterfowl Festival 40 S. Harrison Street, Easton, MD 21601.

Richard R. Crotsley, formerly of Easton, MD, passed away on Tuesday, June 8, 2021. He was 88. Born in Baltimore, MD on April 20, 1933, he was the son of the late Raymond Crotsley and Rose Crotsley. Richard graduated from Paterson Park High... View Obituary & Service Information

The family of Richard R. Crotsley created this Life Tributes page to make it easy to share your memories.

Send flowers to the Crotsley family.