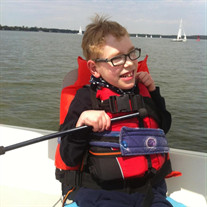 Honoring the Life of Philip Tilghman Paca Logan 2001-2021 Tilghman Logan passed away peacefully during the early morning hours of Sunday July 11 at his home in Oxford, Maryland. Loved and admired by all who knew him, Tilghman was a keen sailor, gardener, artist, and advocate for people with disabilities. He sang in the choir at The Waters United Methodist Church, founded in 1883 to serve persons of African descent living on the Oxford Neck. Many of the parishioners represent Founding Black Families of Maryland. Tilghman was also a favorite at The Tred Avon Yacht Club where he worked with his father to champion accessible sailing. A member for fifteen years, he took part in their Focus on Sailing Program, and competed in the Robbie Pierce regattas in New York representing The Tred Avon Yacht Club. Tilghman was known for his cart, often overflowing with garden clippings, as he worked on Mill Street. Greeted by all, he used to exclaim, “How do they all know me!” Tilghman graduated from New York City’s Lab School for Collaborative Studies in June. He had a passion for history and worked with friends and family during the pandemic to found The Water’s Edge Museum in honor of his closest friend, the late Mrs. Frances Curtis (1920-2018). Seeing every bit of the royalty in her, Tilghman affectionately referred to Mrs. Curtis as “My Lady,” and beyond Oxford, shared with her good times in New York City, Paris, and Antigua, where they made many lifelong friends. Anyone fortunate enough to witness the two interacting, sharing much in spite of the eighty-one year age difference, knows that they are now together in heaven. Tilghman is survived by his parents, Philip Logan and Barbara Paca, Uncle Bobby Paca, and caregivers Toliver Thomas and Annie Miller. A service will be held on the grounds of The Church of the Holy Trinity, 502 South Morris Street in Oxford, on Saturday, 17 July at 11:00 a.m. He will be laid to rest in the Oxford Cemetery among his forebears near the water’s edge. Reception following at The Water’s Edge Museum at 101 Mill Street, Oxford. In lieu of flowers, the family requests donations be made in Tilghman’s memory to The Waters Church Building Fund, P.O. Box #125, Oxford, MD 21654. Zoom Link for Saturday - Webinar number 829 8254 7448 Password trinity1

Honoring the Life of Philip Tilghman Paca Logan 2001-2021 Tilghman Logan passed away peacefully during the early morning hours of Sunday July 11 at his home in Oxford, Maryland. Loved and admired by all who knew him, Tilghman was a keen sailor,... View Obituary & Service Information

The family of Philip Tilghman Paca Logan created this Life Tributes page to make it easy to share your memories.