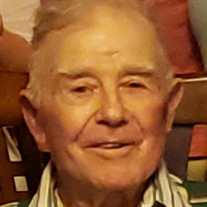 Ollie Hayden Ervin of Chestertown, MD died on August 18, 2021, at the Resorts at Chester River Manor in Chestertown. He was 92. He was born near Church Hill, MD on June 23, 1929, the son of the late Thomas Nathaniel and Viola Everett Ervin, raised by Lula Kemp and Nathaniel Ervin. Mr. Ervin was educated in Sudlersville and at the age of thirteen he began farming with his father. When he turned nineteen, he began working with Mt. Pleasant Farm, where he worked on and off for his entire life. Mr. Ervin was married to Betty Louise Leager on March 27, 1952. He managed Conquest Farm near Centreville for nine years before starting a career with Baltimore Business Forms in Chestertown, which later became Reynolds & Reynolds. He retired after thirty years. Mr. Ervin’s true passion was Standardbred sulky horse racing. His best horse, Jodi Lin, won many stakes races. He got his first horse in 1976 and has raised and raced them ever since. He was very well known in the racing community. He was also a member of the United States Trotting Association. Mr. Ervin loved farming, driving his tractor, and of course, horse racing. He was preceded in death by his daughter, Barbara Schauber, and seven brothers: George, Bobby, Bill, Harry, James, Bradford, Linwood and sister Virginia Dadds. He is survived by his wife, Betty Ervin; his children, Roland Ervin of CA, Kenneth Ervin of Chestertown, MD, Rodney Ervin of FL, Norman Ervin of Chestertown, Lewis Ervin of FL and siblings: Gerry Cooper of Chestertown, Debbie Conley of Centreville, Carolyn Chapman of Baltimore, Christine Brittingham of Church Hill, Nathanial Ervin of Wye Mills, Betty Lou Register of NC, and Henry Ervin of Virginia Beach, VA; as well as 15 grandchildren and 21 great-grandchildren. Funeral services will be held on Wednesday, August 25, at 11:00 am at Fellows, Helfenbein, and Newnam Funeral Home in Chestertown where relatives and friends may call the evening prior from 6:00 – 8:00 pm. Interment will be in Crumpton Cemetery.

Ollie Hayden Ervin of Chestertown, MD died on August 18, 2021, at the Resorts at Chester River Manor in Chestertown. He was 92. He was born near Church Hill, MD on June 23, 1929, the son of the late Thomas Nathaniel and Viola Everett Ervin,... View Obituary & Service Information

The family of Ollie Hayden Ervin created this Life Tributes page to make it easy to share your memories.

Send flowers to the Ervin family.