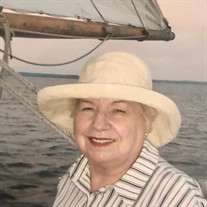 Norma Bryan Forrest passed away on August 22, 2021, in Orlando, FL. She was 90 years old. Norma was born on February 26, 1931, in Easton, Maryland, the daughter of the late Norman Reynolds Bryan and Louise Stevens Bryan. Norma graduated from Easton High School, Class of 1948 and was a lifelong resident of Talbot County. She was a member of the Oxford Methodist Church. Norma married George “Ben” Forrest Sr. on October 8, 1949, in Church Creek, MD. Ben was a former Talbot County Sheriff and Norma worked alongside Ben in the same office. After retiring from the Sheriff’s office, Norma was able to use her vast knowledge of Talbot County and Oxford to educate and entertain guests of both the Robert Morris Inn and Sandaway Suites and Beach. Mrs. Forrest is survived by her children; Dona Forrest Tillman (David) of Orlando, FL, George “Ben” Forrest Jr. (Suzanne) of Menominee, MI, June Forrest Bowman (Doran) of Orlando, FL, son-in-law Tommy Cottingham; eight grandchildren, Ann, Mary, Jenny, Sarah, Jena, Bryan, William, and John and 15 great-grandchildren. Also survived by her brothers; Donald Kemp Bryan (Peggy) of Kensington, MD and Francis Steven Bryan of Easton, MD and her many nieces and nephews. In addition to her parents, she was preceded in death by, her husband George “Ben” Forrest Sr., her daughter, Jean Forrest Cottingham (Tommy) and her sister-in-law, Sandra H. Bryan. Norma was affectionately known as “MyO” to her grandchildren and great-grandchildren. She loved them and they loved her. She will be missed by her children, and everyone that knew her. She had her funny wit until the end. She expressed to her daughters, her appreciation of the visits, love, and prayers she had received. Graveside Services will be held Monday August 30th at 11am in the Oxford Cemetery. The family requests you use Covid precautions.

Norma Bryan Forrest passed away on August 22, 2021, in Orlando, FL. She was 90 years old. Norma was born on February 26, 1931, in Easton, Maryland, the daughter of the late Norman Reynolds Bryan and Louise Stevens Bryan. Norma graduated from... View Obituary & Service Information

The family of Norma Bryan Forrest created this Life Tributes page to make it easy to share your memories.

Send flowers to the Forrest family.