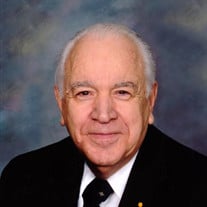 Nicholas Richard Torraca, 94, passed away at UMSMC at Easton on October 28th, 2021. He was born on March 21, 1927 in New York, NY to the late Joseph P. Torraca and Angela Marino Torraca. Richard attended Stuyvesant High School and left to attend the United States Merchant Marine Academy at Kings Point, NY. Upon graduation in 1947, he received a Bachelors Degree in Marine Engineering and a certificate in both Coast Guard steam engineering and diesel engineering. He was immediately commissioned into the U.S. Navy, serving on a navy auxiliary ship as an engineering officer in the Pacific. He later continued to serve his country in the reserves as a Lieutenant and was honorably discharged in 1969. On May 3, 1952, Nicholas Torraca married Evelyn T. Hoerburger and they resided in Brooklyn, NY, later moving to Long Island in 1955. IN 1950, he began working for the New York Telephone Company and later transferred to Bell Laboratories in 1968 when he and his wife moved to Marlboro, NJ. In 1971 he took a position with AT&T and returned to the New York Telephone Company in 1979. He retired as a Systems Administrator with New York Telephone Company in 1985, and moved to Neavitt, MD. Mr. Torraca is a member of the Maritime Museum Boat Shop, where he assists in restoring old Chesapeake Bay boats. He also enjoys model boat building. Richard is predeceased by his wife, the late Evelyn Torraca, who passed away in 2017 and his grandson, Richard Torraca II (2020), and his brother, Joseph P. Torraca (2016). He is survived by his three children, Richard Torraca and wife Michele, Margaret Benjamin, and Kathryn Butler and her husband Douglas; three grandchildren, Alicia, Erika and Larissa, along with four great-grandchildren. The family will receive friends at Fellows, Helfenbein & Newnam Funeral Home on Tuesday, November 2nd, from 4pm – 6pm. A memorial mass will be held Wednesday, November 3rd, at 10:30am at Sts. Peter and Paul Catholic Church, 1210 S. Washington St., Easton. Interment will be at St. Joseph’s Cemetery in Cordova.

The family of Nicholas Richard Torraca created this Life Tributes page to make it easy to share your memories.

Nicholas Richard Torraca, 94, passed away at UMSMC at Easton...

Send flowers to the Torraca family.