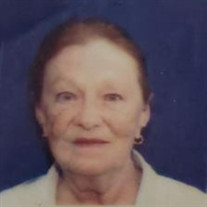 Niala Jean Berger nee Schwartz passed away on Monday, August 16,2021 at Autumn Lake Assisted Living Facility in Denton, Maryland. Born in Baltimore on August 27, 1933, daughter of Edna Miller and Frederick Schwartz. The youngest of 3 children, she’s preceded in death by her parents, her bother Frederick, Jr., and her sister Dorothy. A child of the Depression, she’d recount memories of deprivation, and hardship. But she persevered. She had a beautiful voice and sang in her youth church choir. She met her soon to be husband, Ron, on a blind date in 1950, it was instant attraction. The family moved several times throughout the years following her husband’s Army assignments. Niala especially liked living in El Paso, Texas, surrounded by the mountains. And after moving to the Eastern Shore in 1960, she embraced living on the Chesapeake Bay. She would do moonlight swims when the jellyfish weren’t present. She valued learning and expanding her world view. Books were in abundance in her home, available for anyone to read and explore. As a young newlywed, she worked as a bookkeeper for Harley’s Submarine Shop in Baltimore. She took on the bookkeeping duties for a liquor store she and her husband owned in Kingsville, MD. After moving to the Eastern Shore, she worked a variety of jobs: Toll Collector on the first Bay Bridge (just recently she expressed surprise that the toll is now only collected one way), cashier at the Kent Island Acme. Her career interests then took her to Tidewater Publishing for twenty years, starting out with the printing press crew and working her way up to the art layout department. After retirement, she worked part time as a receptionist for Queen Anne’s County Department of Social Services. When her sons were young, she served as troop leader for their Cub Scout troop. She also volunteered with an adult literacy program. A true green thumb, she was a stellar indoor plant whisperer, able to revive even the most forlorn flowerless twig back to full bloom. She qualified for Mensa but declined to join because there were dues involved. In her more quiet moments, she was an avid solver of puzzles, both crossword and Sudoku, completed in ink. She is survived by her children, Rhonda Berger Townley of Centreville, Ronald Thomas Berger, Jr. of Stevensville, Gregory Keith Berger of Ridgely, and Michael Eric Berger of Centreville, 6 grandchildren, 14 great-grandchildren and 1 great-great grandchild. “In a child’s eyes, a mother is a goddess. She can be glorious or terrible, benevolent or filled with wrath, but she commands love either way. I am convinced that this is the greatest power in the universe.” N.K. Jemisin She was all that, and more. Interment is private. In lieu of flowers, donations may be made to the National Alzheimer’s Association.

The family of Niala Jean Berger created this Life Tributes page to make it easy to share your memories.

Send flowers to the Berger family.