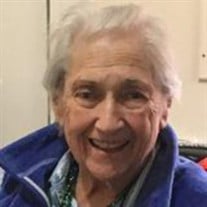 Nancy Joseph Clem passed away on October 31,2021 at Dixon House in Easton. She was 87. Born December 10, 1933, in Washington, D.C., Nancy was the daughter of the late Arthur Buffum and Alice Ayars Joseph of Takoma Park. After graduating from Montgomery Blair High School in 1951, she attended the University of Maryland where she received her B.S. Degree in Home Economics in 1954. She then moved to Talbot County where she was a 4-H Extension Agent. Nancy married Richard Lee “Dick” Clem in 1956 and they lived in Westminster where she taught in Taneytown until 1958 when they returned to Easton. They were blessed with three sons. While raising her family she did long-term substitute teaching for Talbot County and worked for Wright’s Fabrics. In 1983 she became Executive Director for Channel Marker, growing the mental health and wellness support program until retiring in 1998. Nancy’s political career began in 1978 when she was elected to the Democratic State Central Committee. In 1982, 1986, and 1990 she was elected to the Talbot County Council. Then in 1996 she finished a three-year term representing her Ward on the Easton Town Council due to the death of then Mayor George Murphy. She was a member of Christ Church, Easton where she had taught Sunday School and served as Senior Warden. Since 1978 she had served on several councils and on numerous community boards and organizations. Nancy is predeceased by her husband Richard L. “Dick” Clem (1997) and sister Elizabeth J. “Betty” Hansen (2021). She is survived by her three sons; Colonel (ret) joseph “J.D.” Clem of Chantilly, Virginia, Darrin L. Clem of Oxford and Warren D. Clem of Easton; and her five grandchildren Spencer J. Clem of Ponte Vedra Beach FL, Jeremiah A. Clem of Chantilly VA, Graydon L. Clem of Easton, 1Lt Chancellor D. Clem Honolulu HI and Allison Ann Clem of Easton. Memorial services will be held at the Christ Church, Easton on Friday, November 19, 2021 at 10:00 AM. Memorial donations may be made to the Talbot County Extension Advisory Council (TCEAC), 28577 Mary’s Court, Suite 1, Easton, MD 21601 or to Channel Marker Foundation, 8865 Glebe Park Drive, Unit 2, Easton, MD 21601. For online condolences, please visit www.fhnfuneralhome.com.

Nancy Joseph Clem passed away on October 31,2021 at Dixon House in Easton. She was 87. Born December 10, 1933, in Washington, D.C., Nancy was the daughter of the late Arthur Buffum and Alice Ayars Joseph of Takoma Park. After graduating from... View Obituary & Service Information

The family of Nancy Clem created this Life Tributes page to make it easy to share your memories.

Send flowers to the Clem family.