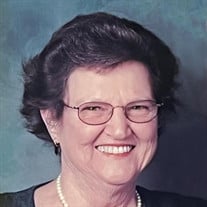 Mildred Stansbury, age 90 of Chapel Hill, NC, passed away peacefully on January 15, 2022. Mildred was born to Osborne and Agnes Rider in Baltimore, MD. She graduated from Towson Catholic High School in 1949 and met her husband Roger “Pat” Stansbury while performing in a stage production. They wed in 1953 when he returned from the Korean War and went on to have three daughters, Teresa, Mary Pat and Anne. Mildred received her Nursing degree from Hagerstown Junior College (Cum Laude) 1974, and received her B.A. in Psychology from Mount St. Mary’s College (Magnum Cum Laude) 1977. She received her M.S. in Counseling Psychology from Loyola College 1981. During her career, she designed and implemented a psychiatric day treatment program and developed and managed a hospice program for the terminally ill and their families, providing training for hospice volunteers. Milli had a love of music and singing. She was involved in many community theater productions and was very active in the Catholic Church where she sang in the choir and as a cantor. Milli and Pat loved boating and spending time with their friends on the Chesapeake Bay. She was widely known among her family and friends for making outstanding Maryland crab cakes. Milli had a strong sense of adventure and curiosity. Over the course of her life, she made multiple trips to Ireland to learn about her family’s heritage. She returned each time with new friends, stories, songs, and recipes, which she delighted in sharing with her family. Mildred was predeceased by her husband Roger Stansbury, and brothers Osborne, Jack, Richard and Thomas Rider. She is survived by her daughters Terry (Allan) Weber, Mary Pat (Mike) Kelley and Anne (Scott) Ray; her grandchildren Caitlin (Rich) Fiorella, Amanda (Will) Pilcher, Brennan (Megan) Kelley, Patrick Kelley, Keegan (Kristi) Ray, Aidan Ray and six great grandchildren. For those wishing to make a donation in honor of Mrs. Stansbury please do so at Hospicefoundation.org

The family of Mildred Stansbury created this Life Tributes page to make it easy to share your memories.

Send flowers to the Stansbury family.