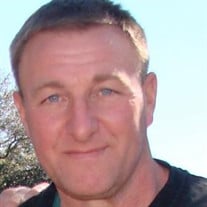 Michael Anthony Haddock, 60, of Easton, MD, unexpectedly went home to be with The Lord on December 4, 2021. Michael was born on October 16, 1961, to James "Ike" Haddock and Mary Ellen (Henry) Haddock in Easton, MD. Michael was a 1979 graduate of Easton High School. After graduation he joined the United States Air Force where he was a military police officer. Shortly after his military service Michael began his plumbing career and eventually became a Master Plumber. He started his own company, Haddock’s Plumbing & Heating in 2000. Michael was teaching his son Micah the trade and they worked together side by side every day. Michael was such a people person and never knew a stranger. His friendly personality and meticulous plumbing work made him loved by his clients. In 1999, he met Wendy Wilson, and they wed in 2000. They were blessed with two amazing children, Micah, and Natalie. Michael was a member of First Baptist Church where he was on the security team. He loved spending time with his family whether it was coaching his son’s baseball team or going to his daughter’s dance performances. Family always came first, and his family was his world! Michael enjoyed camping, golfing, playing with his beloved dog, Bailey, going to his weekly Bible study group, and spending time in nature. Michael is survived by his loving wife, Wendy Haddock; their wonderful children: Micah James Haddock and Natalie Claire Haddock; and many beloved family members. He was preceded in death by his parents, his sister, Bonnie Haddock Kirby, his brother, James "Jim" Haddock and his beloved dog, Cooper. Services will be held at Fellows, Helfenbein & Newnam, Funeral Home, 200 South Harrison Street, Easton, MD 21601. Visitation will be held Monday, December 13, 2021, at 10:00am to 12:00pm, with a service to follow at 12:00pm the same day.

Michael Anthony Haddock, 60, of Easton, MD, unexpectedly went home to be with The Lord on December 4, 2021. Michael was born on October 16, 1961, to James "Ike" Haddock and Mary Ellen (Henry) Haddock in Easton, MD. Michael was a 1979 graduate... View Obituary & Service Information

The family of Michael Anthony Haddock created this Life Tributes page to make it easy to share your memories.

Send flowers to the Haddock family.