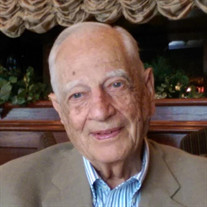 Melvin "Mel" Douglas Specht passed away peacefully at Queenstown Landing in Queenstown, Maryland on February 11, 2022. He was 103 years old. He was born on August 26th, 1918 to the late Phares Douglas Specht and the late Margaret Wolford. He grew up in Milton, Pennsylvania in Northumberland County with family, aunts, uncles and cousins. He attended and graduated from the Milton school system. Throughout his life he enjoyed woodworking and made Grandfather Clocks, Rocking Horses, Kitchen Hutches, Footstools, a variety of knick knacks and painted items. He loved animals, especially dogs, but also raised rabbits, fish and birds with his children. His career was with G.C. Murphy Company and he worked there until his retirement. He and his family experienced numerous relocations during his career which took them to various areas of Pennsylvania, Indiana and Maryland. Before retirement he was assigned as the District Manager for the Baltimore Washington District and he resided in Severna Park, Maryland. Once retired he remained in Severna Park until 2019 when he went to the Eastern Shore. After retirement Melvin enjoyed playing golf and continued doing many more woodworking projects. He traveled for golf vacations around the world and when home he played at the Chartwell Golf and Country Club in Severna Park, MD. Along with his parents, he is predeceased in death by his beloved Frances J. Tessein Specht as well as Marcelle Gerson Specht, his four brothers Eric, Arthur, Allen and Ralph Specht and his sisters Margaret Reeder (Learon) and Mary (Joseph) Finck, and a stepson Glenn Gerson. He is survived by 2 daughters Frances (Robert) Hacker and Margaret (John) Fuller and his son Melvin Douglas Specht. He had a stepson, Joseph Gerson. Melvin had 3 granddaughters: Maureen Beck, Jennifer Cooke (Van) and Kristin Kryder (Mike). He had 3 step granddaughters. He had 8 great grandchildren: Meghan, Molly and Mara Beck, Samantha and Morgan Cooke, and Ryan, Nathan and Colin Kryder. He had 4 step great grandchildren. In lieu of flowers, contributions can be made to Compass (Hospice), 160 Coursevall Drive, Centreville, MD 21617. Mr. Specht will be cremated, and a Celebration of Life will be held at a later date.

Melvin "Mel" Douglas Specht passed away peacefully at Queenstown Landing in Queenstown, Maryland on February 11, 2022. He was 103 years old. He was born on August 26th, 1918 to the late Phares Douglas Specht and the late Margaret Wolford. He... View Obituary & Service Information

The family of Melvin Douglas Specht created this Life Tributes page to make it easy to share your memories.

Send flowers to the Specht family.