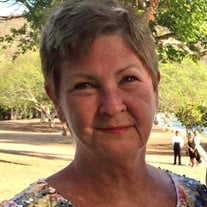 Mary Patricia Sussex Jones Devoted mother, wife, grandmother, and sister died at home surrounded by family on March 9, 2022 from complications of lung cancer. MaryPat, also affectionately known as MP, Mom, and Minnie, utilized immunotherapy and stubborn determination to outsmart this disease for over five years since her diagnosis in 2017. She was seventy-five years old. Born August 29, 1946 to Dr. James N. and Margaret A. Sussex, MaryPat was the second eldest of four close-knit sisters. She graduated from the University of Alabama with a degree in mathematics having been introduced to her future husband, Vernon Brewster Jones, as a young college student. MP spent the early years of her marriage to Bruce as a full-time mother and homemaker to her two adored children, Margaret “Flynn” and Fletcher Sussex. She was a dedicated and creative mother who nurtured her children’s passions and explorations, instilling in them a quiet confidence in their abilities and a lifelong love for learning. MaryPat applied her own interest in problem-solving to work as a tutor before beginning a professional teaching career with the National Institutes of Health (NIH) where she taught young patients receiving cancer treatment. An insatiable desire to learn ultimately propelled MP to return to school herself and in 1999 she graduated from Johns Hopkins University with a Master of Science Degree in Biotechnology. With this advanced degree, MaryPat returned to work for NIH again - this time as a genetic researcher. She was passionate about her work in the Genomics Lab in the National Human Genome Research Institute, particularly her collaborative research to detect the genes associated with various human diseases. Although MaryPat loved her career, the role she treasured most besides mother was that of “Minnie” to her grandchildren: Reece, David, Cameron, Sarah, Meg, and Robert. They never doubted the depth of her love or her support of their pursuits as evidenced by their handmade baby blankets, early morning birthday calls, and the countless sporting events and family celebrations she traveled to attend. She shared with them her affinity for crossword puzzles, Pop-Tarts, books, ice cream, naps, astronomy, and iced/hot tea. MaryPat is survived by her life partner, Bruce Jones, daughter and son-in-law Flynn and Rob Cunningham, son and daughter-in-law Fletcher and Heather Jones, six grandchildren, and her deeply beloved sisters and confidantes, Eileen Hardin, Lorraine Rendleman, and Teresa Horrow. She will be missed by an extended circle of family, friends, and scientists, as well as the devoted circle of caregivers who supported her throughout the last two years of her life, most especially Lisa, LaDonya, Corrine, Betty, Christine, and Talbot Hospice. A private memorial service will be held at a later date. Donations in MaryPat’s honor may be made to Talbot Hospice, https://talbothospice.org/donate/why-giving-is-important.html or the American Cancer Society, https://donate3.cancer.org/

The family of MaryPat Jones created this Life Tributes page to make it easy to share your memories.