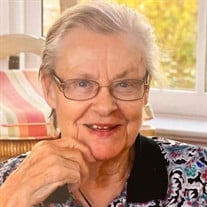 Mary Wagner Ridgeway died peacefully on March 9, 2021 at University of Maryland Shore Medical Center in Easton. She was 89. Born January 17, 1932 in Philadelphia, PA., she was the daughter of the late Edgar Ray and Bridget Devlin Wagner. As a child, her family moved to Johnstown, PA and eventually settled in Lakewood, Ohio, a suburb of Cleveland. Mary loved ice skating, was a voracious reader and had fond memories of attending Cleveland Indian baseball games with her father. She graduated from St. Stephen’s High school in Lakewood, where she worked on the school’s newspaper and studied business science. She was a member of the Clementine Club of St. Clemens Catholic Church in Cleveland. Mary was a devoted Catholic and was a faithful parishioner of every church she attended. Mary spent her working years in the accounting field as a bookkeeper. In 1956 she wed Phillip W. Siemer Jr. in Cleveland. They moved to Washington, D.C., as he was employed as a statistician with the U.S. Census Bureau. They soon moved to nearby District Heights, MD to accommodate their growing family of a son and two daughters. Mary’s life was one of resilience and perseverance. Upon the sudden death of her husband, Phillip, in 1961, she returned to the workforce and was employed at Conroy and Williams law firm in Suitland, MD. There, she met Fenton Stanley Ridgeway Jr., a local real estate company owner. They wed November 20, 1964 and together formed a big, beautiful, boisterous, blended family in District Heights, MD. With grace and devotion, she stepped in to manage a household, feed an army, chauffeur a squad of children and still be of assistance to her husband’s real estate company. Then, just to make things more interesting, they added another daughter, bringing the family count to 11. Mary and Stan traveled extensively and enjoyed boating. Along the way, they discovered the Eastern Shore, moving the family outside of Oxford in 1971. Mary embraced life on the Shore, and was a member of the Thursday Morning and Tuesday Night Bowling Leagues, The Easton Memorial Hospital Ladies Auxiliary, the Oxford Fire Company Ladies Auxiliary and the Oxford Library. She especially enjoyed her membership in the Talbot Country Club, where she spent many hours on the golf course either with the Wednesday Morning Nine-holers or with Stan on Champagne Golf Friday afternoons. Later in life, she found an endearing group of friends in the Foxy Ladies of Oxford Red Hat group. Much fun followed, with many long, wine-filled lunches, excursions, parties and trips to national conventions. One of her favorite things was spending time with family. Mary’s Fourth of July and Christmas parties were legendary and she had a supernatural ability to pull them all together. It was truly a gift. Mary enjoyed having crab feasts, could read a book a day if able to, tried not to miss an episode of Jeopardy or NCIS, and enjoyed a relaxing cocktail with friends and family. Mom Ridgeway is survived by her children, Joyce Carol Dann of Fallston, MD; Jon Royce Ridgeway (Susan) of Perdido Key, FL; Judith K. Brunclik of Millville, DE; Phillip W. Siemer III (Alice) of Suttons Bay, MI; Mary S. Valliant (David) of Oxford, MD; and Janice R. Ware (Jesse) of South Berwick, ME. She is predeceased by her husband, Fenton Stanley Ridgeway Jr.; sons Fenton Stanley Ridgeway III and Mark W. Ridgeway; and a daughter Eileen S. Schauber. She is also survived by 22 grandchildren and 20 great-grandchildren. The family is forever grateful to her devoted caregivers during the last few years of her life, especially Ms. Jackie Dotson. Mary loved and appreciated her more than she’ll ever know. A Mass of Christian Burial and a Celebration of Life will be held at a later date. Donations in her memory can be made to Sts. Peter and Paul Catholic Church, 7906 Ocean Gateway, Easton, MD 21601 or the Oxford Volunteer Fire Department, 300 Oxford Rd., Oxford MD 21654

Mary Wagner Ridgeway died peacefully on March 9, 2021 at University of Maryland Shore Medical Center in Easton. She was 89. Born January 17, 1932 in Philadelphia, PA., she was the daughter of the late Edgar Ray and Bridget Devlin... View Obituary & Service Information

The family of Mary Wagner Ridgeway created this Life Tributes page to make it easy to share your memories.

Send flowers to the Ridgeway family.