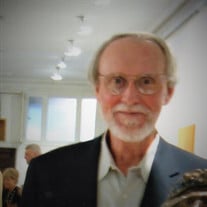 Martin "Marty" Vic Hughes of Easton, MD passed peacefully away at home on December 3, 2021. The son of Martin O'Neil Hughes and Clarice Louise Rose, he was born on November 26, 1937, in Cambridge, Ohio. Upon graduating from Cambridge High School, he was recruited by the FBI and moved to Washington, DC, where he resided until serving in the United States Army. Upon completion of service, he returned to the FBI as a fingerprint specialist. By then living in Alexandria, VA, he went into computer management for private industry, and subsequently moved on to positions with the Smithsonian Institution and the Library of Congress. During this time in the early 1970's, he also developed an active interest in sculpture and began experimenting in metallic forms. Resigning his position at the Library, he pursued art full time, and became one of the founding members of the Torpedo Factory artists' community in Alexandria, VA. It was here that he met his wife-to-be of 36 years, Mary Ann Schindler. While maintaining a studio in the Torpedo Factory, he completed several large commissions as well as smaller work that is represented in private collections throughout the U.S. Nonetheless, the rigors of the "starving artist" lifestyle led him to return to the Library of Congress, and from there to the House of Representatives, where he rose to Director of House Information Systems. It should also be noted that he was a formidable member of the House Information Systems baseball team, incurring an alarming string of needlessly exotic injuries. Upon retirement, he and Mary Ann bought an old farmhouse on the Miles River and moved to the Eastern Shore. They enjoyed renovating the property while striving to maintain the historic charm of the original home. Martin established a studio in an outbuilding and continued to enjoy sculpting full time. His work was exhibited at the Academy Art Museum, Dorchester Arts Center, Main Street Gallery, Gallery by the River, Opal Gallery, Davis Art Center, and many other venues. Martin was the founding member of the Miles River Underground Croquet Club, and won the prestigious Golden Mallet award in 2002, 2005 and 2008. One of his favorite pastimes was traveling to new destinations with adventurous, foolhardy, and fun-loving friends and relations. He remained ever-enthusiastically anticipating the next trip despite any misadventures that might have transpired. Late in 2019, Martin and Mary Ann bid a fond adieu to their home on the Miles and moved to a lovely new spot-on Harrison Street in Easton, enjoying the benefits of "downtown" living. Martin is survived by his wife, Mary Ann Schindler; his sisters Emily Dickerhoff (Ron), and Megan Dixon (Greg); a brother Timothy Hughes (Nancy); many much beloved nieces, nephews, and cousins; and his cat, Grace Hopper. In lieu of flowers, please send donations to Talbot Interfaith Shelter, 107 Goldsborough St, Easton, MD 21601, or Talbot Hospice, 586 Cynwood Dr, Easton, MD 21601. A celebration of life is being planned for a later date in the new year.

Martin "Marty" Vic Hughes of Easton, MD passed peacefully away at home on December 3, 2021. The son of Martin O'Neil Hughes and Clarice Louise Rose, he was born on November 26, 1937, in Cambridge, Ohio. Upon graduating from Cambridge High School,... View Obituary & Service Information

The family of Martin V Hughes "Marty" created this Life Tributes page to make it easy to share your memories.

Send flowers to the Hughes family.