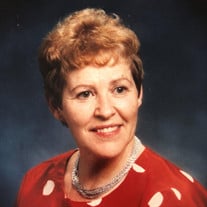 Martha Nell Rochester of Stevensville, Maryland died Friday, February 26, 2021 at Corsica Hills Nursing Home in Centreville, MD. She was 93. Born on August 31, 1927 in Halls TN, she was the daughter of the late, James and Ruby Chipman Curtis. At a young age, she married Floyd L. Butler and had three children. After their divorce, she met and married Samuel S. Rochester, Jr and had three children. They moved to San Diego, California where she worked for the Food Basket Corp. She finally settled in the Annapolis area in 1959. Martha was a loving mother and homemaker. Her needlework was beautiful. She enjoyed gardening, cake decorating, reading, and creating loving works of art through oil painting for family and friends. She was a waitress at Denny’s on Rt 50, near Cape St Claire, for many years where she made many friends and brightened many peoples' day with her dazzling smile. She eventually moved to live with her daughter on Kent Island until, due to her health, she moved to Corsica Hills Assisted Living Center. Martha is survived by a son, Lloyd Butler, wife Martha, of TN; daughters, Sharon Butler Chandler, husband Jerry, of AL; Linda Butler Novosel, husband Bill, of MD; Angel Rochester Chaney, husband Phillip, of AL; Renee Rochester Pyle, husband Steven, of HI; and Karen Rochester Xenos, husband Maurice, of MD; a ton of grandchildren and great-grandchildren. She is also survived by two brothers, David and James Curtis. In addition to her parents, she is predeceased by one grandson, ex-husbands Samuel Stephen Rochester, JR. and Floyd Butler, three brothers and two sisters. Per her request, there is no service and burial will be private. In lieu of flowers, contributions can be made in her name to a charity of your choice. Testimonials can be made at www.fhnfuneralhome.com

Martha Nell Rochester of Stevensville, Maryland died Friday, February 26, 2021 at Corsica Hills Nursing Home in Centreville, MD. She was 93. Born on August 31, 1927 in Halls TN, she was the daughter of the late, James and Ruby Chipman Curtis. At... View Obituary & Service Information

The family of Martha Nell Rochester created this Life Tributes page to make it easy to share your memories.

Send flowers to the Rochester family.