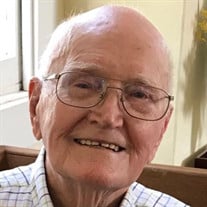 Marion Payne of Salisbury, MD passed away on April 3, 2022, at his home surrounded by his family. He was 93 years and 10 months. (After the age of 90, he always counted the months.) Born on May 10, 1928, in Centreville, MD, Marion was the son of the late Romie Hollingsworth Payne and Clara Virginia Anderson Payne. He grew up in Queen Anne’s County, MD and graduated from Centreville High School in 1945. After working 3 years on the family farm, 4 years in the US Navy in his chosen field of electronics, and 6 years in the private sector including his own “Payne’s TV Service”, he completed a 37-year career with the federal government and retired from the Federal Aviation Administration in 1990. In 1953, Marion married the love of his life, Mary Rebecca Covington, and began building a loving family of faith that now numbers 6 children, 16 grandchildren and 20 great grandchildren. He cherished each family member and loved talking to people wherever he went, always ensuring in the later years they learned the length of his marriage (69 years) or his age (93-10) and usually both. Marion is survived by his loving wife Mary Covington Payne of Salisbury, MD; children Marilyn Propper (Dale); Marion Payne (Ruth); Robert Payne; Cheryl Payne; Julia Swartz; David Payne (Joy); sister Shirley Jaramillo; and his cherished grandchildren and great grandchildren. In addition to his parents, he was predeceased by his brothers Howard Payne, Romie Payne, and William Payne and his son-in-law Michael Swartz. An initial visitation with the family will be held on Friday, April 8, 2022, from 5 pm to 7 pm at his home church, Charity United Methodist, in Salisbury, MD. There will be a second visitation on Saturday, April 9, 2022, from 11 am to 12 pm at the Fellows, Helfenbein & Newnam Funeral Home in Centreville, MD, followed by a service beginning at noon. Burial will follow in Chesterfield Cemetery. In lieu of flowers, donations may be made to Charity United Methodist or a charity of your choice. Marion, Dad, Red, Pops, PopPop and PopPopPop will be greatly missed.

The family of Marion Payne created this Life Tributes page to make it easy to share your memories.

Send flowers to the Payne family.