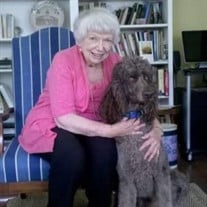 Delegate Marian L. Patterson (Midge) was born on June 19, 1926, in Wilmington, Delaware to the late John and Reba Fisher Leach. She earned a bachelor’s degree in Political Science from Goddard College and dedicated her life to public service. On September 29th, 1947, she married David Alan Patterson. They raised a daughter, Susan, and son, David Jr, and were married for 60 years before David Sr, passed away. She was active in many political campaigns, was a member of the League of Women’s Voters, served on many commissions and committees at both local and state levels and worked eight years for the National Conference of Christians and Jews. She served one term in the Maryland House of Delegates and then was appointed as Maryland’s Deputy Secretary of State during the Hughes administration. Once “retired” she and Dave moved to Princess Anne where she soon became a Town Commissioner. She also served on the Princess Anne Historic District Commission, Somerset County Liquor Control Board and was instrumental in the development of the Smith Island Cultural Museum which shares the history, culture, and traditions of the Smith Island watermen. Marian had a passion for reading, collecting antiques, and gardening. She participated in the Princess Anne Garden Club and Historical Society. Many who passed by her historic home, built in the 1850’s, complimented her gardens which were composed of colorful beds with unique textures that bloomed throughout the seasons. Passersby might also have noticed either of two loyal companions Charlie Brown, standard poodle, or Ben, goldendoodle, peaking out of a window as they filled the void after Dave passed. Marian enjoyed spending time with her five granddaughters and welcoming seven great grandchildren to the family. She is survived by her daughter Susan (James) Wilson; Son David (Jeanine) Patterson: 5 granddaughters: Christine (Aaron) Mendenhall, Natalie (Daniel) Chavez, Tiffany (Noah) Bankhurst, Miranda (Andreas) Meiseingseth, Chelsea (Orlando) Ramirez; 5 great grandsons (Jacob, Evan, Teddy, Levi, Santiago) and 2 great granddaughters (Avery, Artemisia). Memorial contributions in Marian’s name can be made to: Friends of Queen Anne’s County Library, (https://friendsofqaclibrary.org/donate) or Smith Island Cultural Center (http://smithisland.org). For online condolences please go to www.fhnfuneralhome.com

Delegate Marian L. Patterson (Midge) was born on June 19, 1926, in Wilmington, Delaware to the late John and Reba Fisher Leach. She earned a bachelor&#8217;s degree in Political Science from Goddard College and dedicated her life to public service.... View Obituary & Service Information

The family of Marian Ellen Patterson created this Life Tributes page to make it easy to share your memories.

Send flowers to the Patterson family.