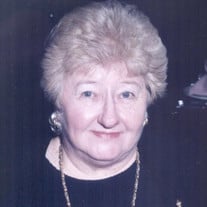 Mrs. Marguerite “Peggy” Soucy Mundt was born on August 23, 1924, in North Andover Massachusetts to the late Oscar Laurent Soucy and Marguerite Conlin Soucy. She attended North Andover High School, graduation class of 1941. She then attended Mary Washington College in Fredericksburg, Virginia and soon after began her teaching career at Caroline County High School in Denton, Maryland. In 1949 she married John J. Mundt. After residing in Williston, MD, they made their permanent home on Mount Pleasant Court in Easton, MD. Soon after the births of her children, Margot, and Jay, she began her teaching career in St. Michaels, MD in 1956. Mrs. Mundt taught French, English and science during her career but the sciences were her love. Earth Science was the class into which she poured her passion for teaching. Discussing the constellations and collecting rocks wherever she travelled gave her joy. In 1984 she retired after nearly 40 years of teaching in the local school systems. Mrs. Mundt is a member of the Talbot County Retired Teachers Association, Alpha Delta Kappa Sorority, and SS Peter and Paul Church. She was an avid card player and a member of numerous card groups. But Bridge was the game she enjoyed the most, starting with friends in college and throughout her life. She has taught many people how to understand and enjoy the game. Mrs. Mundt and her late husband, John, who died in 1976, have two children, Margot Spies (Taylor) and John “Jay” Mundt (Linda); six grandchildren, Taylor Spies Jr. (deceased n 2012), Paul Spies (Laura), Alex Spies (Terri), Corey Spies (Katie), Kelly Horvath (Mike), Stacy Bentley and 18 great-grandchildren. Her brothers, Oscar Soucy and Fred Soucy are deceased. Mrs. Mundt had many hobbies and interests, but her dogs were the love of her life. Having been widowed since the age of 53, her poodles were the center of her life. She greatly mourned the passing of her dog, Maxine, who was her constant companion, in 2019. A mass of Christian burial will be held at SS. Peter and Paul Catholic Church 1210 South Washington Street, Easton, MD on Friday 9/3/2021 at 11AM. The family will receive friends from 10 AM until 11AM at the church prior to Mass on 9/3/2021. Mrs. Mundt will be cremated and will have a private internment of her ashes at Springhill Cemetery in the near future. In lieu of flowers those wishing to make a donation in Mrs. Mundt’s memory you may do so to: The Peggy Mundt Science Award Fund at Mid-Shore Community Foundation. Checks should be payable to Mid-Shore Community Foundation, 102 East Dover St. Easton, MD 21601. Donations may also be made online at www.mscf.org.

The family of Marguerite Soucy Mundt created this Life Tributes page to make it easy to share your memories.

Send flowers to the Mundt family.