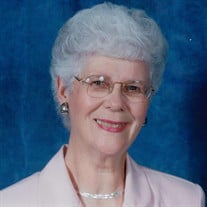 Margaret “Peggy” Schauber Davis of Chestertown, MD died on Sunday, February 20, 2022 at the Asbury Solomons Retirement Community in Solomons, MD. She was 93. She was born in Easton, MD on February 8, 1929, the daughter of the late Arthur K. and Violet E. LeCates Legg. She was a graduate of Chestertown High School with the Class of 1946. She worked at the Mutual Fire Insurance Company office in Chestertown from 1946 to 1949, then the Peoples Life Insurance company from 1949 to 1955. She married Robert F. Schauber on July 12, 1951. She continued to work for Peoples Life until their first child was born, when she became a stay-at-home mom. Later, she worked at Kent School for 20 years as a secretary. Peggy enjoyed entertaining, boating, and traveling with Robert to insurance conventions all over the world. They were married for 42 years before he passed away in 1994. In 2000, Dallas Ellwood Davis, whom Robert and Peggy had both known in their younger years, returned to Chestertown for his 50th reunion at Washington College, where they renewed their old friendship. She later married Dallas in 2001, and they travelled, took cruises, and enjoyed each other’s companionship until his death in 2006. Peggy remained in Chestertown until October of 2009 when she moved to Asbury-Solomons in southern MD to be closer to her daughter. She made many friends, worked in the local gift shop, joined the stitchery club, and gave tours to perspective residents. She was the past president of the Kent County Council of Homemakers, a volunteer with Kent Hospice, and a member at large of the Beta Sigma Phi Sorority. She was also a member of First United Methodist Church in Chestertown and Olivet United Methodist Church in Lusby. She is predeceased by both of her husbands; her daughter Barbara S. Yowell of Chestertown (1993), her stepdaughter, Debra Hillman, and stepson-in-law, Dick Hillman. She is survived by her daughter, Phyllis S. Keefe (Steve) of Solomons, MD; her grandchildren, Jim Yowell (Tammy), Michael Yowell, Amy Yowell, Katie Keefe Drury (Ryan) and Meghan Keefe; and great-grandchildren John Yowell, Grant Yowell, and Hadley Drury. She is also survived by her stepdaughters, Karen Myers (Norman), Joan Ray (Larry); eight step-grandchildren; fifteen step-great-grandchildren; and two step-great-great-grandchildren. Funeral services will be held on Friday, February 25, 2022 at noon at Fellows, Helfenbein, and Newnam Funeral Home 130 Speer Road Chestertown where relatives and friends may call at 11am. Interment will be in Chester Cemetery. Contributions may be made to the Asbury Foundation Benevolence Fund at https://www.asbury.org/foundation/ways-to-give/ or the First United Methodist Church at 105 N Mill Street, Chestertown, MD 21620.

Margaret &#8220;Peggy&#8221; Schauber Davis of Chestertown, MD died on Sunday, February 20, 2022 at the Asbury Solomons Retirement Community in Solomons, MD. She was 93. She was born in Easton, MD on February 8, 1929, the daughter of the late... View Obituary & Service Information

The family of Margaret "Peggy" Schauber Davis created this Life Tributes page to make it easy to share your memories.

Send flowers to the Davis family.