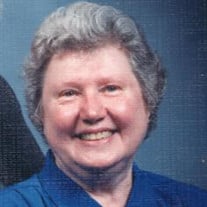 Margaret J. Higgins died on Wednesday, December 8th, 2021, at Candle Light Cove Assisted Living in Easton. She was 91. Born September 1st, 1930, in Easton, MD to the late Oliver O. Jones and Bessie V. Gith Jones. She attended St. Michaels High School, graduating class of 1947. She began working at C&P Telephone and remained with them for 3 years until coming home to raise her family. In 1969, she began working at Memorial Hospital as an accountant, until retiring in 1995. On August 14th, 1953, she married the late George H. Higgins and they resided in Neavitt, MD. Mrs. Higgins is survived by her son G. Herman Higgins, Jr., and his wife Suzi, of Easton; two grandchildren, Sean Higgins and Sarah Mickey and her husband, Keith; and great-grandchildren, Zander Mickey, Gavin Mickey, Maddison Mickey and Jacob Mickey. She is also survived by her sister, Ida Reynolds of Ohio. Along with her husband, Margaret is predeceased by her sons, Michael Higgins and Jerry Higgins, and sister, Esther Parks. In lieu of flowers, memorial contributions can be made in her honor to the Alzheimer’s Association, Eastern Shore Chapter, 909 Progress Circle, Suite 400, Salisbury, MD 21804, www.alz.org/maryland.

The family of Margaret Jane Higgins created this Life Tributes page to make it easy to share your memories.

Send flowers to the Higgins family.