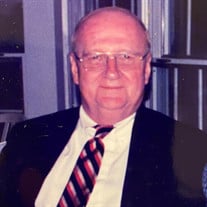 M. Rogers Smith of Chestertown, passed away peacefully at home surrounded by his family on Tuesday, January 25, 2022. He was 91. Born on May 10th, 1930, he was the son of the late Maurice and Nellie Smith. He was a lifetime resident of Kent and Queen Anne’s Counties. Rogers graduated from Centreville High School in 1947 and received a bachelor’s degree in economics and history (magna cum laude) from Washington College in 1951. After graduation he served as an officer in the United States Air Force during the Korean War. Upon his return, he obtained a master’s degree in education from the University of Maryland. He retired as assistant superintendent of Queen Anne’s County Public School System after 34 years as a teacher and administrator. After retirement from the school system, Rogers worked in the real estate industry. Active in many community organizations throughout his life, he was a member of the Chester River Yacht and Country Club, Frank M. Jarman Post 36 American Legion, Maryland State Education Association, The Brotherhood of St. Andrew, and a lifetime member of the Maryland Congress of Parents and Teachers. He was a member of the Chestertown Lions Club organization for over 60 years and was presented with the Melvin Jones Fellow Award. Rogers was a former member of the Kent School Board of Trustees, Upper Shore Mental Health Center Advisory Board, A.F. Whitsitt Center Advisory Board, Chesterwye Center Board of Trustees, Queen Anne’s County Drug and Alcohol Advisory Committee, Chester River Hospital Foundation Board, and the Kent County Chapter of The American Red Cross. A longstanding member of Emmanuel Episcopal Church, he served on the Vestry and was a Senior Warden. He was an avid reader with a particular interest in history. Rogers also enjoyed attending and watching the Baltimore Orioles and Maryland Terrapins basketball teams. He loved and lived for his family and spending summer vacations and holidays with them. Rogers is predeceased by his wife of 66 years, Bette Smith. He is survived by a son, Mark Smith; a daughter, Lisa Falls (Bill); five grandchildren, Kristen Smith, Kelsey Smith, Kyle Lindstrom (Kelly), Corey Lindstrom, and Katie Falls; two great grandchildren, Kylie Purse and George Lindstrom; and a sister-in-law, Betty Larrimore. A celebration of life will be held on Saturday, February 26th at 1:00 pm at Emmanuel Episcopal Church in Chestertown, MD. A reception will follow the service at the Chester River Yacht and Country Club. Contributions may be made in his memory to Emmanuel Episcopal Church, P.O. Box 875, Chestertown, MD 21620, Chestertown Lions Charities, Inc., P.O. Box 265, Chestertown, MD 21620, or Compass Regional Hospice, 160 Coursevall Drive, Centerville, MD, 21617.

M. Rogers Smith of Chestertown, passed away peacefully at home surrounded by his family on Tuesday, January 25, 2022. He was 91. Born on May 10th, 1930, he was the son of the late Maurice and Nellie Smith. He was a lifetime resident of Kent... View Obituary & Service Information

The family of M. Rogers Smith created this Life Tributes page to make it easy to share your memories.

M. Rogers Smith of Chestertown, passed away peacefully at home...

Send flowers to the Smith family.