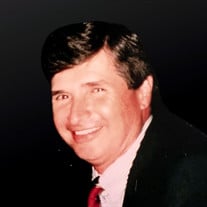 Leo Wayne Boise (Wayne), 77, a resident of Bel Air, Maryland, passed away on January 5, 2022. Wayne was born in Alexandria, VA, on July 13, 1944. He graduated from Centreville High School, Centreville, MD Class of 1962, Vice President of his class. He played on the Centreville Panthers Baseball Team for three years and was a glee club and special chorus member. After graduation, Wayne attended the University of Maryland College Park from 1962-1964. He then proudly served in the U.S. Navy from April 1965-April 1969. He was Honor Man out of Boot Camp Company 130, Great Lakes, Illinois, and Sailor of the Month and Sailor of the Year, Squadron VT24, Beeville, Texas. Wayne married the love of his life, Cheryl Blackburn, on January 16, 1971. They made their first home in Baltimore and, years later, moved to Bel Air, MD. In 1986, Wayne founded A.D. Painting & Home Improvement Co., providing meticulous craftsmanship and customer satisfaction for nearly three decades. Wayne enjoyed hunting, fishing, carpentry, gardening, and watching baseball and football games. He treasured sharing his interests and hobbies with his sons, attending their scouting and sporting events, and the time he spent with his grandson, Dominic, brought him pure joy. Wayne was a born-again, spirit-filled Christian. He was an outgoing and personable man whose earthly ministry of naturally planting seeds of faith brought many people to the Lord. He loved his Lord, his country, family, and friends. Wayne is preceded in death by his father Leo Ralph Boise, his mother Virginia Walls Boise, and step-father Carlton Callahan. Wayne is survived by his loving wife Cheryl, sons Scott Boise, (Karen) Albuquerque, NM and Shaun Boise, Bel Air, MD, and grandsons Dominic Boise, Samuel Tubb, Zachary Tubb, and many cousins. Wayne was a loving and devoted husband, father, and grandfather, and he will be greatly missed. A graveside service will be held on Wednesday, January 12, 2022 at 11:00 am at Church Hill Cemetery. In lieu of flowers, memorial donations may be made to Tunnel for Towers Foundation, 2361 Hylan Boulevard, Staten Island, NY 10306. (718) 987-3909 https://t2t.org

Leo Wayne Boise (Wayne), 77, a resident of Bel Air, Maryland, passed away on January 5, 2022. Wayne was born in Alexandria, VA, on July 13, 1944. He graduated from Centreville High School, Centreville, MD Class of 1962, Vice President of his... View Obituary & Service Information

The family of Mr. Leo Wayne Boise created this Life Tributes page to make it easy to share your memories.

Send flowers to the Boise family.