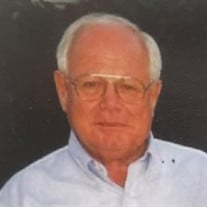 Lawrence Layton Morris, Sr of Centreville, MD died at home Wednesday November 17, 2021. He was 93. Born on May 21, 1928 on the farm in Centreville, MD he was he son of the late Lawrence Anderson Morris, Jr and Louise Chance. Raised in Centreville, MD and after graduating high school in August of 1945 he received an appointment to West Point but failed the physical. He then spent a year at Strayer College. On May 28, 1949 he married Mary A. Ullrich and they resided in Centreville, MD. In 1949 he started working for Maryland State Highway and later to Queen Anne’s County Engineer until the county expanded into the Department of Public Works and he became the 1st Director of Public Works in Queen Anne’s County. During Lawrence’s retirement he enjoyed traveling with Mary and playing with his grandchildren and great grandchildren. During the springs and summers he always enjoyed planting his flower beds. He also took daily rides throughout the county with his family friends and caregivers. Along the rides you’d most likely find him at a local restaurant enjoying their crab cakes. He is survived by his five children, Mary Lou Wright, Larry L. Morris, Jr.(Susan), Shirley Kay Gardner (Wayne), Terri Russum (Frank) and Marty Doty (George). A dear family member, Warren Wright (Kathy); Nine grandchildren, Beth Carr (Mark), Lauren Thayer (James), Kate Mills (Ryan), Lee Gardner (Angela), Dana Wineke (Chris), Charlie Russum (Heidi), Dylan Russum (Amber), Jennifer Franz (Justin), and Rebecca Hutchison (Darin) and 21 Great Grandchildren. His wife Mary Ullrich Morris predeceased him in February 22, 2013. A visitation will be held on Sunday November 21, 2021 from 2PM to 4PM at the Fellows, Helfenbein & Newnam Funeral Home 408 South Liberty Street Centreville, MD. 21617. A funeral service will be held 11AM on Monday November 22, 2021 at the Centreville United Methodist Church 608 Church Hill Road Centreville, MD 21617. The family requests that memorial contributions be made to Goodwill Fire Company 212 Broadway Centreville, MD 21617.

The family of Lawrence Morris, Sr. created this Life Tributes page to make it easy to share your memories.