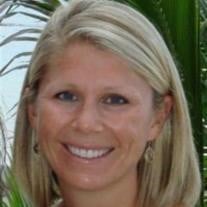 Kellie Cathleen Thompson Shiley died surrounded by her loving friends and family on Monday July 16, 2012 at University of Maryland Shock Trauma Center from complications following the delivery of twin baby girls. She was born and raised in Annapolis, residing there until 1998 when her family moved to the Eastern shore. Kellie was a high school all American Lacrosse player at St Mary’s High School where she was a member of the 12 year club. In 1998, she received the United States Women’s Lacrosse Heather Leigh Albert award recognizing the most outstanding schoolgirl Lacrosse player in spirit and as well as athletic ability. She was then inducted into the US Lacrosse Hall of Fame in Baltimore for this achievement. While at St. Mary’s, she captained her team to the AIS State championship, and graduated third in her class academically as an Academic All American. In 2010, she was inducted into St Mary’s Royal Blue Club Hall of Fame. Her exceptional high school lacrosse career propelled her to the University of North Carolina at Chapel Hill where she continued to excel, serving as their Women’s Lacrosse Team’s Tri-Captain her Junior and Senior years, and earning International College Lacrosse Association (IWCLA) All American status in her Sophomore, Junior and Senior years. In 2001, she was a finalist for the distinguished Tewaarton Trophy for the top college female lacrosse Player. While playing for UNC, she set an NCAA tournament record of 10 points (eight goals, two assists) in a 2002 win over UMBC, a single game NCAA record that remains to this date. She remains UNC’s all-time record holder for most goals in a game – eight. She was UNC’s career goals (222) record holder from 1998 through 2011. She was an all ACC team member in 2001 and an all ACC Tournament team member in 2002. She was on the ACC Academic Honor Roll all four years of her College years. She graduated with a baccalaureate degree in business from the distinguished University of North Carolina Kevin Flagler School of Business in 2002. She was a member of the United States Women’s Lacrosse 2003-2004 Elite Team as they prepared for the world cup. She was most recently employed with Pfizer as a pharmaceutical sales representative. Kellie was an avid reader who loved the Chesapeake Bay, boating, hunting, fishing, being with her friends, and was a seriously dedicated housekeeper. She was teased that she loved to vacuum more than anything, but the true love of her life, along with her husband Ryan, was their young son, Landon. She spent countless hours engaging Landon with educational opportunities. Her greatest achievement was seeing him respond and blossom under her amazing guidance. She was so excited as she anticipated the same wonderful responses from her twin girls. She is survived by her loving husband Ryan Paul Shiley; son Landon Neil Shiley (23 months); newborn daughters Ryan Paige Shiley and Blake Lillian Shiley (4 days); parents Robin and Roseanne Thompson and brother R. Scott Thompson. In lieu of flowers the family suggests a donation to a college fund being set up for the benefit of her children (details via the family), Anne Arundel Medical Center Mobile Blood Bank or the Anne Arundel Medical Center NICU with gratitude for their immense support of Kellie’s twins during their mother’s illness. A funeral mass for Kellie will be held at St. Mary’s Church in Annapolis on Monday July 23 at 9 AM. Burial will follow at Stevensville Cemetery in Stevensville, MD. A Celebration of Life will be held on Monday at noon at the Kent Island Yacht Club, Chester, MD. Memorial contributions may be made at www.kelliethompsonshiley.org. Arrangements provided by Fellows, Helfenbein & Newnam Funeral Home, P.A., Chester, MD.

Kellie Cathleen Thompson Shiley died surrounded by her loving friends and family on Monday July 16, 2012 at University of Maryland Shock Trauma Center from complications following the delivery of twin baby girls. She was born and raised in... View Obituary & Service Information

The family of Mrs. Kellie Cathleen Shiley created this Life Tributes page to make it easy to share your memories.

Send flowers to the Shiley family.