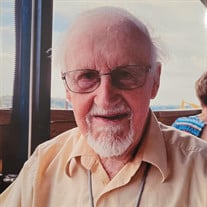 Keith Gordon Huntley (1923-2022) of Chestertown passed away on January 4 at The Barnett Hospice Centre, Centreville, Md. Born in London, England, Mr. Huntley attended Latymer School and had plans to attend Cambridge University when he was called into service by WWII. Mr. Huntley served in the Royal Signals Corps in India from 1945-1946. These signal units were, and continue to be, the first into action, setting up communication and IT systems required for operations. In 1945, before leaving for India, he married his wife of 63 years, Doreen Elizabeth Byrne. In 1946 he returned to England, his wife, and their infant daughter. He then began his career as a research engineer developing field cameras for TV, which gave him the unique opportunity to film the 1948 Olympic Games, the Queens wedding to Prince Philip, and the coronation of Queen Elizabeth II. Eventually his career led him into the development of computers, ATM banking and credit card services. This career brought him to America in 1962, along with his wife and their two daughters. He truly was a member of “the greatest generation”. Somewhat of a renaissance man Mr. Huntley was also an avid sailor and a talented classical pianist. His home near London enabled him to enjoy sailing off the south coast of England. After moving to the US, he enjoyed the waters off the New England coast and then the Chesapeake Bay. He was able to share his love of sailing with his family, providing his children and grandchildren with wonderful adventures and memories at sea. Holidays always included the family gathering around the piano, singing Christmas carols. Mr. Huntley and his wife retired to Chestertown in 1984, with his daughters joining them in 1999 and 2004. In 2009, he lost his beloved wife Doreen to Alzheimer’s Disease. Shortly afterwards, Mr. Huntley chose to serve his community by volunteering for several years at the Chestertown Department of Aging, sharing what he learned during his wife’s illness by helping senior citizens decipher the mysteries of Medicare and Medicaid forms and the financial implications. In 2011 he entered a Spiritual Commitment with Jane Forfar Birchman. He and Jane enjoyed a three-year relationship, which sadly ended with her also succumbing to Alzheimer’s in 2014. Recognizing the need to keep the family’s British heritage alive, Mr. Huntley became deeply involved in learning more about his ancestry and gifted his family with genealogical research, as well as both oral and written stories of his past. In addition, as a reflection of the importance of his faith, he worked diligently on assisting The Church of the New Jerusalem in Mitchellville, MD cataloging and uploading sermons to their website. He was blessed with an intact mind throughout his 98 years, engaging in political and complex economic conversations with his family, even at his last birthday party. Mr. Huntley is survived by two daughters, Shelagh Grasso (Carmelo) and Pamela Coll (Jaime); four grandchildren, Carol DiGiammarino (Frank), Christopher Grasso (Bernadette), Phillip Grasso (Laura) and Jennifer Lyons (Sean); and ten great grandchildren: Catherine, Maya and Ellie DiGiammarino; Elizabeth, Olivia and Abigail Grasso; Joseph and Jackson Fromm; William and Lyla Rose Lyons. Funeral services will be private, for family only, due to the Covid pandemic. Services and Internment will be held at Bryn Athyn Cathedral in Pennsylvania on January 16. Donations in honor of Mr. Huntley may be made to Compass Regional Hospice, 160 Coursevall Drive, Centreville, Md. 21617

Keith Gordon Huntley (1923-2022) of Chestertown passed away on January 4 at The Barnett Hospice Centre, Centreville, Md. Born in London, England, Mr. Huntley attended Latymer School and had plans to attend Cambridge University when he was called... View Obituary & Service Information

The family of Keith Gordon Huntley created this Life Tributes page to make it easy to share your memories.

Send flowers to the Huntley family.