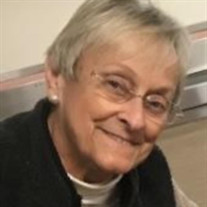 Kathryn Ann “Peggy” Markman, 79, peacefully passed away on March 6, 2022 at Queenstown Landing, an assisted living facility in Queenstown, MD, where Peggy was recently moved from her home in Rock Hall, MD. Peggy was born in Lancaster, PA, the daughter of William F. and Helen O. Weaver. William Weaver was executive vice president of the Blue Ball National Bank and Helen was a full-time nurse. She graduated from Garden Spot High School in New Holland, PA, where she sang in the choir, played saxophone in a local dance band and school marching band, as well as the organ at her church. She received a BS degree from American University and an MBA degree from the George Washington University in Washington, D.C. She became a certified public accountant, specializing in non-profit organizations. She ended her career as a member of the board of directors and officer of NARAL (The National Abortion Rights Action League). Following her retirement, Peggy and her husband spent eight years exploring the world on their sailboat ‘Espirit’. They moved to Rock Hall, MD in the summer of 2006. Peggy became actively engaged in activities such as: singing as an alto with the Chester River Chorale, member and officer of the League of Women Voters, and golfer and former president of the Nine Hole Golfers at the Chester River Yacht and Country Club. As a member of the chorale, she worked to organize cooperation between members of the chorale and gospel singers of the African American community. Peggy was a person who was always loved by others and was beloved by her husband. She was preceded in death by her son, William Scott Snavely of Keedysville, MD. Peggy is survived by her husband of 42 years, Sherwin Markman; her daughter, Vicki, and husband Tom Cowger of Ada, OK; daughter-in-law, Jeanie Snavely of Keedysville, MD; her sister, Mary Louise Hillard of Pottsville, PA; as well as six grandchildren and two great-grandchildren. A celebration of Peggy’s life will be held on Tuesday, March 15 at 11:00 am at Fellows, Helfenbein and Newnam Funeral Home in Chestertown. A reception will follow the service at The Kitchen in Chestertown. In lieu of flowers, memorial donations may be made to the Chester River Chorale at P.O. Box 461, Chestertown, MD 21620.

Kathryn Ann &#8220;Peggy&#8221; Markman, 79, peacefully passed away on March 6, 2022 at Queenstown Landing, an assisted living facility in Queenstown, MD, where Peggy was recently moved from her home in Rock Hall, MD. Peggy was born in Lancaster,... View Obituary & Service Information

The family of Kathryn Ann "Peggy" Markman created this Life Tributes page to make it easy to share your memories.

Send flowers to the Markman family.