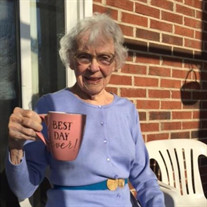 June Weber Landis died at the age of 98 on April 29, 2021. Mrs. Landis was born, June Jeannette Weber, on July 24, 1922, in Philadelphia, Pennsylvania to Maude Joslyn Weber and William Tuttle Weber. She attended Kindergarten through 12th grade in Lansdowne, Pennsylvania where she played field hockey and basketball and was active in student council. After High School, she attended Drexel University, where she met her lifelong love, Wilson A. Landis III (Bud). After college, June worked in Philadelphia at Strawbridge and Clothier and as a secretary at a law firm. Bud and June were married on April 22, 1944 following Bud’s completion of his term of duty as a WWII U.S. Air Force pilot. They settled in the Philadelphia area, before moving for Bud’s work, to Hudson, Ohio, Hinsdale, Illinois and Orchard Park, New York. They retired to Chestertown, Maryland in 1982. June lived life to the fullest every day. She never met a dance floor she didn’t love or a person who didn’t become a friend. She was devoted to her home and family and was a lifelong volunteer for the Episcopal church, hospitals and numerous charities focussed on children’s needs. She was an avid tennis player into her nineties who also loved needlepoint and knitting, especially if the blanket or sweater she was creating was for someone else. Her parties were always lively, especially her theme parties with costumes, games and plenty of dancing. Her indomitable spirit lives on in her children, grandchildren and great grandchildren. She is survived by three daughters: Susan Landis McDonald of Sacramento, California, Janet Landis Forney of Elkton, Maryland and Diane Moran Landis of Princeton, New Jersey; ten grandchildren; and four great grand children. Her second daughter, Nancy Landis Sirianni, died in 1977. A private burial will be held on May 6th at 11:30 a.m., at St. Paul’s Episcopal Church in Chestertown, MD. In lieu of flowers, memorials may be offered to St. Paul’s Kent Parish, 7579 Sandy Bottom Rd, Chestertown, MD 21620. Or, The Heron Point Benevolent Fund, 501 East Campus Avenue, Chestertown, Maryland 21620.

The family of June Weber Landis created this Life Tributes page to make it easy to share your memories.

Send flowers to the Landis family.