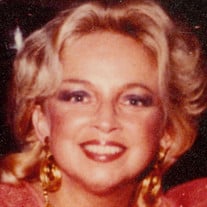 ST. MICHAELS - Joyce Anne Waldridge Young, aka Mummsy, Mammy, Mums, Miss Joyce, Joyce-Anne!, Mom, Honey, Sweetheart, Babes, may have been known by many names but there was never a question about who she was or what she stood for. She was a beautiful... View Obituary & Service Information

The family of Joyce Anne Young created this Life Tributes page to make it easy to share your memories.

Send flowers to the Young family.