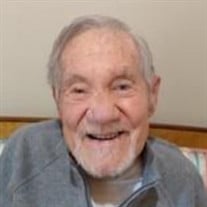 Joseph Dobrenski, Jr., was born November 14, 1930, in Bayonne, New Jersey - a place he called "Sinatra country." Joe was a musician his entire life, playing in several bands and combos and a longtime afficionado of Sinatra, Big Band, and jazz music. He earned a degree in pharmacy from Rutgers University and then entered the Army, where he served as a medic and chief pharmacist. He formed a combo and played saxophone and clarinet. Upon his discharge from the military, Joe used the G.I. bill to attend the New York University Graduate School of Business. He was not interested in being a bench pharmacist but rather wanted to work in the pharmaceutical industry. His first job was with Eli Lilly as a salesman. Joe owned his own pharmacy for 6 years and then joined Smith, Kline, and French, where he became their Manager of Pharmacy Marketing. Later, at GlaxoSmithKline, he became Product Manager and enjoyed his work as an industry lobbyist. He was a founding member of the Northeast Pharmaceutical Conference and an avid Rutgers alumnus - Alumnus of the Year in 1983 - and he continued to advise pharmacy students until recently. He never missed a Scarlet Knights football game! Joe met his wife Faith at a ski club in New Jersey, and they were married for 56 years. They lived in Cherry Hill, New Jersey, for 30 years, where they raised their three children. They continued to enjoy skiing with the family. They later moved to Cecil County, Maryland, where they spent as much time as possible boating during their 20 years there. Joe and Faith have also been on many cruises and have seen a lot of the world. Joe never gave up his music and managed to play at least one song at each of his children's weddings. Joe is survived by his wife Faith, and their children Alison Davis (Tom) of Centreville, Joseph Dobrenski III of Portola Valley, CA, and Leslie Frost of Manhattan, NY, three grandsons Drew and Tim Davis and Miles Dobrenski, and 2 granddaughters Morgan Dobrenski and Clara Frost. He is also survived by a brother and sister- in-law, Donald and Ellen Dobrenski of Rancho Mirage, CA. A funeral service will be held on Saturday, November 6, 2021 at 12:30 PM at Sts. Peter & Paul Catholic Church, 1210 S. Washington St., Easton.

Joseph Dobrenski, Jr., was born November 14, 1930, in Bayonne, New Jersey - a place he called "Sinatra country." Joe was a musician his entire life, playing in several bands and combos and a longtime afficionado of Sinatra, Big Band, and jazz... View Obituary & Service Information

The family of Joseph Dobrenski Jr. created this Life Tributes page to make it easy to share your memories.

Send flowers to the Dobrenski family.