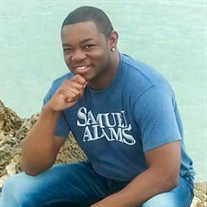 John Temple Terry, better known as “JT”, of Chester, passed away suddenly on July 27th, 2021, at the University of Maryland Medical Center in Laurel. He was 45 years old. The supreme being of the universe constantly sends through birth Ambassadors to act on his behalf to spread love, comfort, and joy to enhance the lives of others. One of the tasks of the Ambassador is to perform on a level playing field yet be stern when the occasion requires a firm stance. Such an Ambassador was born to the union of Dr. Raymond T. Terry Sr. and Rosemary B. Jones-Terry on November 13, 1975. John grew up in Arnold, MD, where he forged a wealth of friendships while remaining active in sports, music, educational camps, church, and community-related activities. He was also a graduate of Cardinal Gibbons Highschool. John’s thirst for knowledge provided a path to higher educational opportunities which resulted in the cultivation of his strong entrepreneurial skills. He refined these skills while attending Tuskegee Institute, AACC (received AA degree), University of Maryland Eastern Shore, in addition to pursuing a master’s degree at Lincoln University. His entrepreneurial journey was inclusive of the following: Sole Proprietorship of a Title Company, Pharmaceuticals Sales, International Commodities, and Top Sales Agent for State Farm Insurance. John was a member of St. Philip’s Episcopal Church, and his Masonic learning and experiences were through the Mount Zion Lodge #10 of the most Worshipful HIRM Grand Lodge AF & AM in Baltimore. John was adventurous and lived on a fourfold program of life; physical, intellectual, social, and based on a strong spiritual foundation in order to enhance the quality of life for his immediate family and his extended family. His infectious laugh and beaming smile will remain in the hearts of all he knew… John is survived by his loving wife Lindsay Terry, and four beautiful children: eldest Son Anthony Terry, Daughter(s) Jordyn and Justice Terry, and Legal Guardian and Uncle to Mark Terry. He leaves behind a devoted and adoring Father; Dr. Raymond T. Terry, Sr., eldest Brother Dr. Philip B. Terry-Smith (Dr. Justin B. Terry-Smith), Sister Joinette S. Smallwood, Brother Raymond T. Terry, Jr., and Brother Mark E.T Terry; in addition to a number of Aunts, Uncles, Nieces, Nephews, Cousins, God-Children, and an overabundance of close family-friends and “adopted children”, to which he’s played a substantial role in raising. He is predeceased by his beloved mother, Rosemary B. Jones-Terry. Visitation for JT will be held from 2-4pm and 6-8pm on Monday, August 9th, at Fellows, Helfenbein & Newnam Funeral Home located at 106 Shamrock Road Chester, MD 21619, followed by a service on Tuesday, August 10th, held at the Chesapeake Bay Beach Club, located at 500 Marina Club Road, Stevensville, MD 21666 from 11-1pm. In lieu of flowers, the family requests that donations be sent to the included address to be used for the futures of John’s Children. The JT Terry Legacy Fund P.O Box 13 Chester, Md 21619

John Temple Terry, better known as &#8220;JT&#8221;, of Chester, passed away suddenly on July 27th, 2021, at the University of Maryland Medical Center in Laurel. He was 45 years old. The supreme being of the universe constantly sends through... View Obituary & Service Information

The family of John Temple Terry created this Life Tributes page to make it easy to share your memories.

Send flowers to the Terry family.