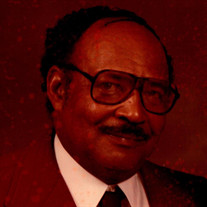 Mr. John Calvin Stewart passed away into eternal life on July 12, 2021 at the age of 88. John was born on September 12,1932 to the late William F. Stewart, Jr. and the late Margaret Virginia Driver Stewart in Stillpond, Maryland. After graduating from Garnett High School in Chestertown, Md., he was soon drafted into the United States Army, serving in the Korean war. Upon his honorable discharge, he returned to Chestertown to join his father in employment through the family business of Stewart’s Well Drilling, Electrical, Pump, and Plumbing Services. He was additionally employed at Kent Youth Inc., retiring there after 31years at the age of 81, as their counselor, mentor, and maintenance man. John was a member of the Thomas H. Kiah 101 Masonic Lodge. During his years of retirement he spent his leisure time faithfully watching his religious programs, mowing his lawn with his John Deere tractor, offering advise and giving assistance to many family and friends on any household, electrical, or plumbing issues. He thoroughly enjoyed having his frequent summer cookouts and crab feasts along with spending time on his deck conversing with family and friends. Most of all, he will be greatly missed for his ability of making others laugh with his witty sense of humor, funny jokes, and silly gestures. No matter what one’s day was like or how bad of a situation, he was always able to find a way to make you laugh or smile and to lift your spirit through his gifted words of encouragement. Leaving to cherish his memory are one son, William F. Stewart III, of Easton, Md., one daughter, Jonnice D. Stewart (Mier) of Chestertown, Md., and two grandchildren, Kiera Stewart and William F. Stewart IV. John was preceded in death by his wife, Lotta Cartwright Stewart. Through this union he gained 3 stepchildren, Angela Smith, William Cartwright, and Harry Cartwright, whom he cherished, mentored and advised as his own. He also leaves behind six special cousins, Richard and Robert Baker, Devon McCoy, Edward Hill, Michael Hill, and Juanann Hatch, along with two great grandchildren and a host of nieces, nephews, cousins, and friends.

Mr. John Calvin Stewart passed away into eternal life on July 12, 2021 at the age of 88. John was born on September 12,1932 to the late William F. Stewart, Jr. and the late Margaret Virginia Driver Stewart in Stillpond, Maryland. After... View Obituary & Service Information

The family of John Calvin Stewart created this Life Tributes page to make it easy to share your memories.

Send flowers to the Stewart family.